JLH has translated three German-language articles about the Mediterranean end of the current “refugee” crisis in Europe. The Mediterranean littoral, especially insular Greece, is the first stop for the migrants arriving on the traffickers’ boats. They don’t want to stay — Southern Europe is too poor and welfare-deficient for their tastes — but they have a significant effect on the unfortunate coastal locales where they debark.

It occurred to me that we have been hearing lot about the people whose governments are forcing immigrants on them, and something about the immigrants themselves, and only coincidentally about the people who are chastised for not stopping it all, so I decided to do a little on Greece (and Italy). Here are three short articles arranged in order to answer the questions:

First, from the Griechenland Blog:

The European Peoples Party harshly criticizes Greece for its conduct in relation to the waves of refugees from the Middle East.

The leadership team of Nia Dimokratia (ND), in Madrid to participate in the congress of European people’s parties, finds itself faced with a document harshly critical of Greece’s attitude in the matter of refugees.

According to reports, the circulating draft caused tension, embarrassment and mobilization under the leadership of (interim chair of the ND) Evangelos Meimarakis to delete harsh expressions from the Central European-inspired draft.

Conservatives want to unload their responsibilities on the South

The subject of refugees evokes particular tension on the political stage of a number of nations, above all, Germany, Poland, Czechia, Slovakia, etc., which are exerting pressure on the EU to take a stronger position toward the flood of refugees streaming from the Middle East in the direction of prosperous Central Europe.

Angela Merkel, who will arrive in Madrid on Thursday (October 22) — after the precipitous drop in her popularity, and a fierce reaction from her own CDU representatives and functionaries, as well as from the partner CSU of Bavaria — executed an about-face and is now exerting pressure on Greece for common patrolling with Turkey in the Aegean. So the conservatives of Europe are trying to throw the ball of their responsibilities for the situation in the Middle East to the countries in southern Europe for their negligent guarding of the borders.

The ND delegation in Madrid — already internally split over procedures for election of a new chair — must also deal with the pressure from the leadership of the EVP concerning the ND’s objections in the decision to fulfill the requirements (of the third memorandum [concerning Greece’s debt to the EU]), because there is a particular concern in the leadership of the EVP that the ND could backslide into the anti-memorandum rhetoric of 2010-2012, which occasioned the “freezing” of relationships of European conservatives with their Greek colleagues.

Second, from Tages-Anzeiger in Switzerland:

How Greece Expects to Manage the Refugee Crisis 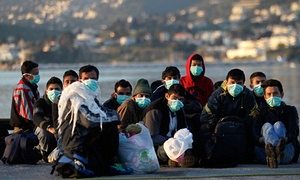 The Greek government intends in ten days at the latest to set up a so-called “hotspot” on the Aegean island of Lesbos for reception and registration of refugees. Altogether five hotspots will be set up on the island of Lesbos, Kos, Samos, Chios and Leros. Most boat refugees crossing the Mediterranean from Turkey in search of the EU arrive at these Greek islands.

Setting up reception and registration centers for refugees is part of the idea of the European Union for an efficient and cooperative procedure to deal with the refugee crisis. Asselborn[1] emphasized that the EU would support Greece “financially and logistically” in setting up the centers.

An EU decision anticipates distributing around 70,000 refugees from Greece to other EU states. Altogether the EU intends to distribute 160,000 refugees from the especially hard-hit countries of Greece and Italy. The first immigrants were brought from Italy to Sweden on Friday.

Italy already has a hotspot

The first hotspot in Italy has already been established on the island of Lampedusa, where the test phase is underway, By the end of November, according to Interior Minister Angelino Alfano, the hotspot will begin its regular business. Further hotspots are planned for the cities of Pozzalo, Porto Empedocle, Trapani, Augusta and Taranto. All should be functioning by year’s end.

Because of good weather, numerous boat refugees are seeking anew to reach Greece. The Greek coast guard reportedly rescued more than 1,100 people from the sea near the islands of the eastern Aegean. The coast guard reported further on Saturday that the rescuers were in action off Lesbos, Leros, Chios, Samos, Farmakonisi and Kos.

Talks between Athens and Ankara

Regarding the 400,000 refugees who have arrived in Greece since the beginning of the year, Asselborn said it would be a long and difficult path to solutions. The governments in Ankara and Athens should use their bilateral cooperation to restrict the number of refugees.

Greek Minister of Immigration Giannis Mouzalas said such talks with Turkey had begun, and he would be meeting his Turkish colleague in Istanbul in the coming weeks.

Violence against refugees in many countries

Meanwhile, the number of violent attacks on refugees in several countries increased. Off a Greek island, five masked men are said to have attacked four inflatables overfilled with refugees.

As the news portal lesvosnews.net and other island media reported on Saturday, the attackers destroyed the outboard motors of the inflatables and then disappeared in their speedboat. They are said to have been Greek right-wing extremists.

In Germany. there were attacks above all in Saxony. In a new accommodation for asylum seekers in Chemnitz, right-extremist sympathizers attacked refugees and wounded two of them slightly, according to police. And a building of a church community which had taken in refugees was attacked. The perpetrators broke several windows and a woman in the house was injured.

According to the German federal police, the number of attacks on asylum residences increased dramatically. “At this point, we have reached 500 — still climbing” said the president, Holger Münch in an Interview of the Week with German Radio, which will be broadcast on Sunday.

The photo of 3-year-old Aylan lying dead on the beach changed us all. His body was found near the tourist favorite, Bodrum in Turkey. Many vacationers are asking themselves: Should we still vacation on the Mediterranean? Yes, we should.

Every day, 600-1,000 refugees set out from the Turkish coast toward Greece. Plagued by hunger, thirst and a desire for a life far from any war. In the streets, they meet vacationers from wealthy lands. Prosperity meets misery. An acquaintance said recently: ‘I don’t know if I could spend my vacation in those places now. It’s not a vacation anymore.” She’s right. And yet we should not stay way from the Mediterranean. 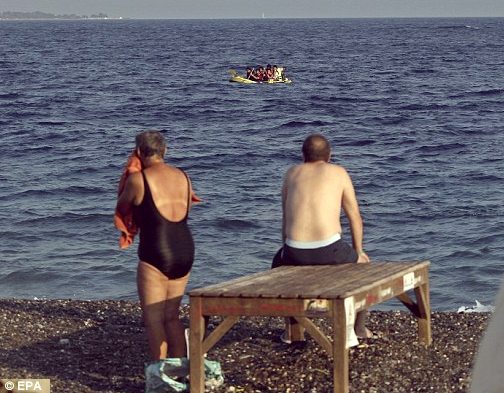 Of course everyone should know that a vacation on Rhodes, Lesbos or Kos at present will not resemble the classic picture of relaxation: lazily lying in the sun, sipping cocktails. We must admit that parts of the Greek, Turkish and also the Italian coast are no longer the vacation idylls that we know from other times.

Yet we must not avert our gaze. It is important that we see what is happening on these islands, on this ocean. Vacationers staying away would make the chaos even worse. Without tourism, the most significant economic branch of these places would break off. In past years, tourism poured 13.4 million euros into Greek coffers. It does not bear thinking about — how the financially strapped country would manage without this money.

After the devastating earthquake in Haiti in 2010, many vacationers traveled there shortly after the catastrophe, and sunned themselves on the beach where many people were dying. Immoral? Maybe. But it helped in the reconstruction and was, therefore, a kind of solidarity.

Photo series: That’s how the refugees live on Kos.

6 thoughts on “What About Greece and Italy?”