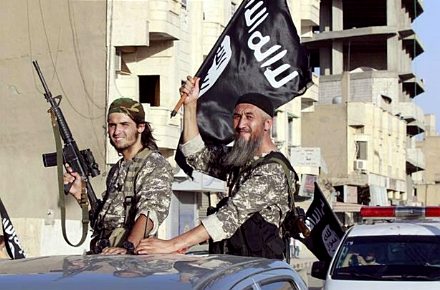 Two weeks ago the United States government asked the media to stop showing “B-roll” footage of Islamic State convoys when they air stories about ISIS on news programs. According to IBT:

Coverage of the war against the Islamic State group in Iraq and Syria do not accurately reflect the reality on the ground because U.S. television networks are using old footage showing the extremist group’s movements, senior officials in the Obama administration have reportedly said. The officials also urged the country’s media outlets to update their recordings of ISIS’ activities in the region.

Top officials in the State Department and the Pentagon called on TV networks to stop using “B-roll” — stock footage that appears on screen with reporters and commentators speaking in the background — showing ISIS at the peak of its strength last year before coalition strikes began, Politico reported.

The Pentagon suggested a revised depiction:

“One Toyota speeding down the road by itself at night with its headlights off,” would be a more accurate image, said Pentagon spokesman Col. Steven Warren.

The next day U.S. Special Forces staged a raid in Syria and killed Abu Sayyaf, an Islamic State commander, and captured his wife. That story dominated the headlines and airwaves for the next 24 hours, although I’m not sure if media outlets complied with the order to revise their B-rolls when they aired it.

The next day the forces of the Islamic State overran Ramadi, the capital of al-Anbar Province in Iraq.

I don’t think the timing of these three things was coincidental. There was no way American intelligence was unaware that Ramadi was about to fall. So: order the revised B-rolls to change the spin on the coverage of ISIS. Then stage a spectacular raid and neutralize a bad guy so as to gain massive admiring coverage. Then, the next day, when Ramadi falls, things don’t look quite so bad.

The conquest of Ramadi is far more significant and momentous than the loss of one ISIS commander, no matter how senior. But the American people don’t know that, which is what the Obama administration is counting on. It’s all spin, spin, spin — domestic political considerations are everything.

As it happens, some of those non-existent convoys for the Islamic State were involved in the capture of Ramadi. Vlad Tepes has uploaded some footage of them, and annotated it with his own commentary:

5 thoughts on “Those Non-Existent ISIS Convoys”