Last month we posted about a demonstration sponsored by MARIAS (Mothers Against Radical Islam and Sharia) at Downing Street in London. The following story is a first-hand account of sexual slavery, told by a young woman who became a victim of a Muslim “grooming gang”.

“Nicola” attended the MARIAS event, but was not willing to tell her story herself, so her account was read into the microphone by one of the organizers. 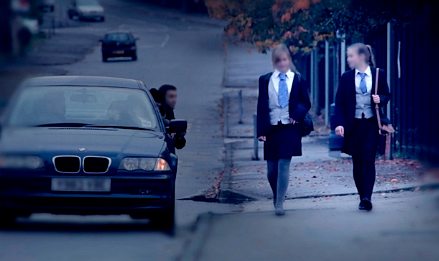 My name is Nicola. I was almost 14 when it started happening to me. It all began with the promise of a modelling job.

I wasn’t a particularly confident girl. When Daniel, the photographer, asked me to do some glamour modelling for him I was flattered and thought it might be fun. Modelling can seem like easy money. Get dressed up and smile for the camera — what’s hard about that?

He came to my home one morning while my parents were working. My younger brother was at school and we had the house to ourselves. He started by taking regular pictures of me, then, by stages, asking me to remove more and more clothing. Eventually he said that we needed new scenery and asked if there was a bedroom we were able to use. I was a bit taken aback as I wasn’t expecting to have to use a bedroom.

I took him to my parents’ room, as mine was a mess — full of Disney toys and babyish things. He continued taking pictures, eventually asking me to strip to my underwear. That’s when I knew something wasn’t right. I was shaky and scared, but I did as I was told. More photos were taken.

Suddenly I heard the front door being unlocked and opened, followed by some voices. My brother and his friends had come home during the school lunch break. I panicked and jumped up, running to the door and holding it shut, shouting to my brother that I had just got out of the bath and for him not to come upstairs.

When I turned around, Daniel had taken off his clothes. I had never seen a naked man before. I froze and felt myself going red with embarrassment. He told me to get on the bed and be quiet or my brother would hear, and if my brother heard then my parents would find out what I had been up to and they’d be angry.

Daniel raped me, and laughed when he realised that I was a virgin. When he was finished he threw a £10 note down and told me to get some nice underwear. He kissed my cheek and told me he’d be in touch.

He kept his promise. He was in touch, constantly. He started asking me to do favours for his friends, threatening to show my parents the pictures he had taken of me if I refused. I continued to do what he told me to for a long time.

When I started to object and tell him I didn’t care who he showed the pictures to, he began beating me to make me do as I was told. When my mum eventually found out what was happening, she called the police. They weren’t very helpful at all. They told my mum that I was a known prostitute, and that she should leave me to it, and that I would stop when I was ready. I was 15 at the time.

The police knew what was happening to me long before my mum did. The officer who was sent to take my statement was a tall and intimidating man. He asked me to go into very intimate details of what had happened to me. I was very upset, but he told me that I’d have to get used to his line of questioning, and that this is what I would have to deal with in court. He was very aggressive and seemed angry. He told me he couldn’t offer me any protection if I testified in court, and for that reason I never testified against my rapists. His attitude and manner put me off ever considering contacting the police for help again.

Instead, I contacted medical professionals, some of whom didn’t believe me. By the time I was 16 I had moved into a youth hostel, because Muslim men would turn up at my home and hang around outside in cars. Sometimes they’d even knock at the door in groups. Men in their 20s, 40s, and 50s. They didn’t care what anyone thought of them, they just wanted their depraved sexual needs satisfied. They didn’t care who was home. They hung around outside my school, and they followed me around like dogs. They threatened to hurt my family if I didn’t co-operate with them. They said they would pour acid down my throat if I told anyone about their threats. 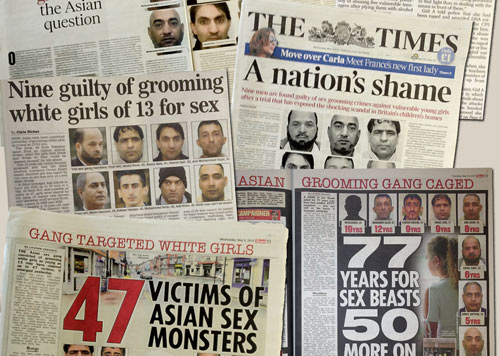 As a result of all this, I started to harm myself in a bid to make myself less attractive to men. I did it on a daily basis, covering myself with hundreds of cuts. It eventually became a comfort and a release and a punishment rolled into one. These Muslim men made me feel bad, dirty, worthless and ashamed. They made me hate myself and what I’d become. I was 16.

I’ve tried to commit suicide multiple times because I could see no escape from them. Things went from bad to worse after I moved into the hostel. I was seeing up to eight men every hour or two, one after the other, some waiting in line and coming back for seconds. I wasn’t allowed to leave the bed or use the toilet or wash myself until they were finished with me. None of them used protection.

Most days I would be called on in the morning, the afternoon, and the evening. It was never just once a day I was needed. And it was never individual men. They always operated in groups. They didn’t care if I was sore or crying or bleeding. They would just laugh and carry on.

I contracted several STIs as a result of the unprotected rapes. Treating them was pointless as I kept contracting them over and over again. There was a point, very briefly, at which I did feel the men were taking care of me. They fed me, gave me drink, and forced me to take drugs. That doesn’t look like care-giving to anyone with good self-esteem, but I didn’t have any, and so the slightest bit of care was welcome and seemed nice.

I was adrift with no one to care for me and no way out of the violence and the threats put to me by these Muslim men. They have hurt and humiliated me. I’ve been raped with a knife at my throat, a drill taken to my kneecaps, kicked, slapped, punched, gang-raped, bottled. And all of it topped off, yet again, by more rapes.

These men are predators. They recognise me on the street today and they ask me to help them find young girls. They’re sick and depraved and lack the maturity to go after real women. Any woman in her right mind would refuse these men.

They say things to me like, “I remember picking you up from school. Your [breasts] look the same today as they did when you were 14.” One of them told me how he raped a 13-year-old girl I know in a hotel, keeping her there all night and raping her in every orifice. They tell me of other horrific things they’ve done to women, including their wives. They talk and laugh about these things among themselves as though it were a normal conversation.

I’ve been offered money to marry men in order to get them into this country. The list of atrocities is long and I’ll leave it there.

I’m not the only girl this is happening to. There are very many who will never tell their tales. A vast majority of Muslim males are getting away with these crimes, even the ones who have been reported. The tragedy is that the girls are the ones who are being blamed. They were out after dark. They were mature for their years. They were street-smart. They’re trouble. No one cares about them. They’re from a broken home. They’re runaways and they’ll just run away again. Why bother? We mustn’t state the obvious, that these men are predominantly Pakistani Muslims.

Not every Muslim is a rapist, but I can tell you I have been raped by hundreds of men, and 98 percent of them have been Pakistani Muslims. That is a fact that has come to light up and down Britain. All of the court records, all of the social service accounts, all of the police reports very clearly support this. You cannot argue with facts.

16 thoughts on ““These Men Are Predators””