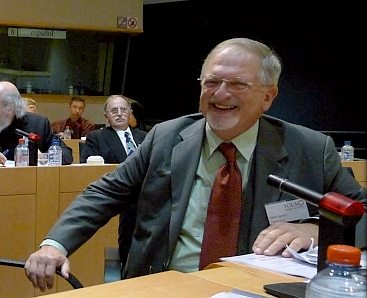 On Tuesday May 5 we learned that Professor Hans Jansen had died. Dr. Jansen was one of the world’s foremost experts on Islam and Islamic law, and his sudden death is a blow to our movement.

The PVV sent out this message shortly after Dr. Jansen’s death (thanks to Vederso for the translation):

Reaction from Geert Wilders to the sudden death of Hans Jansen

With dismay the news has reached us that our highly-valued faction member Hans Jansen unexpectedly died this morning.

On behalf of all members and staff of the PVV political groups in the European Parliament and the House (Tweede Kamer, Second Chamber of the Dutch parliament), our condolences go out to his loved ones. Hans was a special man. He inspired us with his erudition, his wit and amiability. He was an authority on Islam, had a quick mind and a sharp pen. With him has an important pillar of our groups has departed.

We will miss him very much.

Below is a brief bio of Dr. Jansen listing his scholarly accomplishments:

Prof. Dr. Johannes J.G. Jansen (Amsterdam 1942) was Houtsma professor for Contemporary Islamic Thought in the Department of Arabic, Persian and Turkish at the University of Utrecht (The Netherlands) from 2003 till his retirement in 2008.

Dr. Jansen taught Arabic and Islamic Studies at Leiden University from 1982 till May 2005. From early 1979 till the summer of 1982 he was director of the Dutch research center in Cairo, the Nederlands Instituut voor Arabische Studiën en Egyptische Archeologie. He also taught at Groningen University (1975-1979) and at Amsterdam University (1982).

He studied in Amsterdam (1960-1964), Cairo (1966-1967) and Leiden (1964-1968). He received degrees from the Theological Faculty of Amsterdam University (Biblical Hebrew and the History of Philosophy, 1961), the Amsterdam University Faculty of Arts (BA, Hebrew, Aramaic and Arabic, 1964) and the Leiden Faculty of Arts (MA, Arabic, Turkish, and History of the Middle East). He received a doctorate at Leiden in 1974. In Dutch he wrote as ‘Hans Jansen’. In 2010 and 2011 he was witness for the defense in the trial against Geert Wilders.

It was my pleasure to meet Dr. Jansen on two separate occasions, both of them Counterjihad conferences in Brussels. At the first one in 2007 he gave the country report for the Netherlands, and in 2012 he was one of the featured speakers:

For the prepared text of this speech, see “What is Sharia?”

Hans Jansen’s testimony in the first trial of Geert Wilders was crucial. His account of attempts by the court to suborn him as a witness caused the declaration of a mistrial, forcing a second trial of Mr. Wilders (in which he was acquitted). 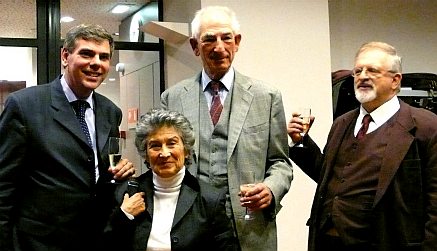 On a personal level, Dr. Jansen was affable, helpful, and easy to work with. He knew more about Islamic law than anyone else of my acquaintance, with the possible exception of Major Stephen Coughlin. His assistance to our cause will be sorely missed.

According to a Dutch contact, Prof. Jansen was also an accomplished essayist in his native language, with an ironic style that was entirely his own.

May he rest in peace.

5 thoughts on “In Memoriam: Hans Jansen”