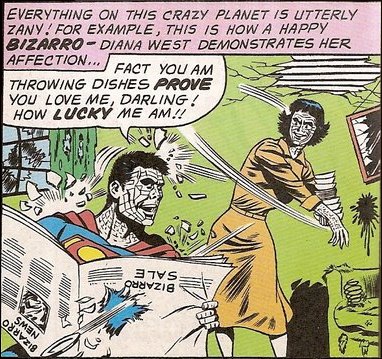 It’s been almost two years since the publication of Diana West’s book American Betrayal, but incredibly, reviewers at ostensibly “conservative” publications and websites continue to mount scurrilous attacks against it. Right-thinking people have evidently determined that Ms. West is insufficiently “housebroken”, and aim to complete their self-appointed task.

The latest hit-piece against American Betrayal was written by Ron Capshaw and published at (where else?) National Review.

Among numerous other gems, Mr. Capshaw’s false assertions include these two: “Diana West’s American Betrayal dusts off this view of FDR as a traitor” and “West avoids such grown-up views, and is in effect the mirror image of Oliver Stone.”

For readers too young to remember the golden age of Superman comics, Bizarro World popped up in those pages as an occasional whimsical feature replacing the everyday world of Metropolis. It was a planet inhabited by analogues of all the Superman characters, but with everything reversed, upside down, topsy-turvy, 180° off of normal. Newspapers were printed upside down. People wept when they were happy and hit each other to express affection. They threw away peeled oranges and ate the rind. They left a building through the entrance and went in through the exit.

Back in the fall of 2013 I described the evidence for a malign but hidden influence whose gravitational field pulled in so many otherwise sensible conservatives and induced them to vigorously condemn Ms. West’s book, usually when they hadn’t even read it. I now realize that I made an error of nomenclature when I dubbed that celestial body “Planet X”. A more appropriate term would have been “Bizarro World”, where up is down and books are full of words that were never written by anybody in this world.

Yesterday Diana West had a few choice words to say about this latest hit piece in NRO:

What follows are brief extracts from the latest entry by Ron Capshaw — apparently, his fifth (5th) such sally. I have stripped his essay down to inferences and charges only.

This latest on American Betrayal is headlined:

The inference, natch, is that American Betrayal argues that these presidents were “Communists.”

NOT IN MY BOOK. (Readers of The Rebuttal: Defending ‘American Betrayal’ from the Book-Burners

, where this phrase repeats and repeats in highlighting some of the lies and fabrications that litter the original Rado-toxic mess, are invited to sing along.)

Now for the excerpts from Capshaw #5:

To get at the type of thinking that declared [FDR, Truman and Eisenhower] to be consciously pro-Soviet, you have to go forward a few years from the early 1950s to the days of the John Birch Society in the late ‘50s.

NOT IN MY BOOK.

It was this group — or, to be more specific, their leader, Robert Welch — that charged FDR with deliberately partnering with Joe Stalin against Hitler to advance the Soviet empire,

who believed Truman and his secretary of state Dean Acheson had deliberately led U.S. soldiers into a deathtrap in Korea thus again aiding the Soviet Union by depleting U.S. manpower;

and who accused Eisenhower, based on his attempts to negotiate with Khrushchev and his refusal to put ground troops into Vietnam, of being a Soviet agent

While dealing with McCarthy only peripherally, Diana West’s American Betrayal dusts off this view of FDR as a traitor

Diana West moves beyond merely defending McCarthy or portraying Roosevelt as naive to asserting a conscious treachery on the president’s part.

Had [FDR] been the Communist portrayed by West …

The bizarro statements listed above comprise fewer than half of those pointed out (and debunked) by Ms. West. The entire piece at NRO is essentially a fabrication.

It is a sally against an imaginary enemy of Mr. Capshaw’s own devising — and certainly not against Diana West or the book she wrote.

When does the “barroom brawl” stop?