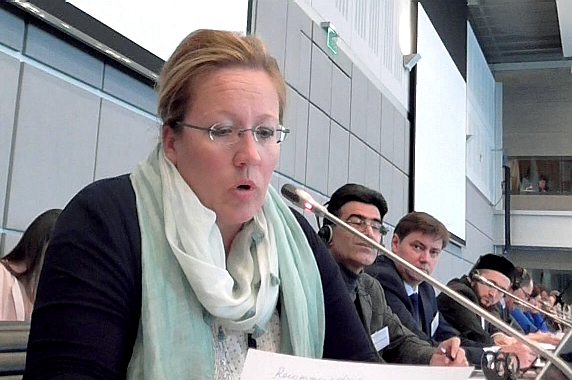 On Thursday and Friday of last week the Organization for Security and Cooperation in Europe hosted the “Supplementary Human Dimension Meeting on Freedoms of Peaceful Assembly and Association, with Emphasis on Freedom of Association” at the Hofburg in Vienna .

As posted last Friday, Elisabeth Sabaditsch-Wolff read an intervention on behalf of Bürgerbewegung Pax Europa at the conference on April 17. The posted text was from the full version of the intervention; time constraints required that a shortened version be read out at the plenary.

Below is a video of Elisabeth’s presentation. Many thanks to Vlad Tepes for uploading this clip:

The prepared text of Elisabeth’s abbreviated intervention is below the jump.

We are grateful to the OSCE for the opportunity to speak out at forums such as this one.

In this context, allow me to note that there are also “downward spiral effects” seen recently in participating States west of Vienna. I very much appreciate your comments, Madam Introducer, however, I would like to remind everyone that there are many groups west of Vienna also taking to the streets with issues that authorities consider threatening.

Finally, we are witnessing smear campaigns mentioned by the introducer. Indeed, both in Germany and Austria, but even more so, in the United Kingdom, participating States are using the court system to shut down critical voices. There are people such as Tommy Robinson, Michael Mannheimer, Michael Stürzenberger, and myself who have been taken to court by the state, without there being any victims, just to make a point and intimidate.

7 thoughts on “Threats and Harassment Inhibit Peaceful Assembly in Europe”