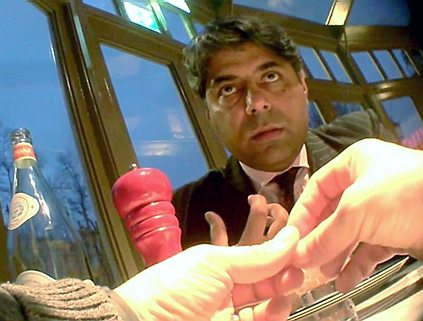 Afzal Amin, a Conservative candidate for Dudley North, told Messrs. Robinson and Eddowes that he wanted the EDL to announce a fake demo in Dudley that the candidate could take credit for stopping. He also proposed hiring EDL members to canvass on his behalf in Dudley.

Unbeknownst to Mr. Amin, Tommy Robinson recorded last Monday’s restaurant meeting. The Daily Mail obtained a copy of the video and published it tonight for a Sunday scoop:

A key Tory Election candidate was suspended last night after plotting with far-Right extremists to stir up racial hatred in a cynical bid to win votes.

Afzal Amin hatched a scheme to persuade the English Defence League to announce an inflammatory march against a new £18million ‘mega-mosque’. But — as he revealed in secretly filmed footage obtained by The Mail on Sunday — the plan was that the demonstration would never actually go ahead.

And when the phoney rally was called off, the fiercely ambitious Amin, a Muslim, intended to take credit for defusing the situation — winning over voters, and police, in the marginal seat of Dudley North.

In return for going along with the scheme, the former Army captain promised the EDL members he would be their ‘unshakeable ally’ who would help bring their extreme views into the mainstream if he was elected to Parliament.

Amin also wanted EDL members to be paid to canvass on his behalf in Dudley — against election law.

But his devious plot was secretly filmed by former EDL leader Tommy Robinson, who blew the whistle on Amin’s scheme because he objected to being used as a pawn in his bizarre power game.

Amin, who has been described on his Tory Party website as a former Army education officer to Princes William and Harry, outlined his plan at an Indian restaurant in Birmingham on Monday.

There he made an apparent offer to Robinson and current EDL chairman Steve Eddowes to covertly pay EDL members to canvass on his behalf. But they were even more shocked by 40-year-old Amin proposing a phantom protest only weeks after a real demonstration in Dudley by 600 EDL supporters led to ugly flashpoints and 30 arrests.

In The Mail on Sunday’s sensational tapes Amin — who openly covets the Prime Minister’s job:…

See the Mail article for the video and a full transcript of the dinnertime conversation.