A reminder: Make sure any messages you send to the prison are CALM and POLITE. I can guarantee you that uncivil rants will be discarded instantly by low-level gatekeepers as soon as they read the first sentence or two.

Last Saturday Tommy Robinson, the former leader of the English Defence League, announced via social media that he was to be sent back to prison. The screen cap below (converted to gray scale to make it more readable) shows a message that was posted by him at that time: 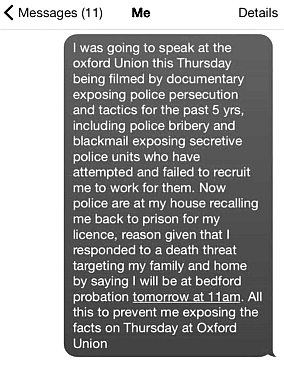 Today this announcement came in from a source close to Tommy Robinson:

The following press release has today been sent to all mainstream media. If you wish to help, please contact Bedford Prison asking for reassurance on Tommy’s safety and requesting that he is moved to Winchester. Prison.

As I am sure most of you are aware, Stephen Lennon aka Tommy Robinson has been recalled to prison for responding to a threat on Twitter. This threat was against him and also implied that his mother would be raped. Screenshots of these threats are available if required.

Tommy’s supporters are requesting that this matter be looked into and investigated thoroughly, as we believe that Tommy is being silenced by the authorities for various reasons:

We also understand that Tommy has today (20/10/14) been sent to Bedford Prison we are not sure if this is a permanent location but we, on behalf of his family, request that he be moved to Winchester Prison where Tommy would have some modicum of security, as we do not feel that he will be safe at Bedford Prison.

Tommy should be allowed his freedom of speech. His sentence is for fraud but his Licence conditions restrict him from contacting EDL friends or attending any demonstrations. Why have these conditions been imposed on him, when they have no connection to the sentence he served?

Evening — What we were concerned about happening at Bedford Prison has indeed happened. Tommy was attacked and has now been put down the block. He took a fair few punches but he also gave a good few back.

Why did the authorities allow this to happen? We knew it would, so they must have known as well.

I don’t have any address for Bedford Prison. When one comes in, I’ll post an update here.

16 thoughts on “Tommy Robinson is Back in Prison”