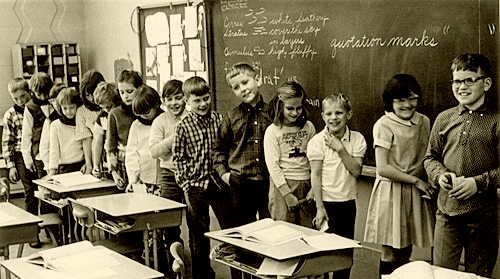 JLH has translated an article about a particularly pernicious form of “diversity training” being practiced in Germany. Interestingly enough, the sessions shown in the ZDF TV documentary can be traced back to an American model from the 1960s.

The translated article from Junge Freiheit:

Getting to Know Your Inner Racist

The new racist mania is called “anti-racism”. On Thursday, ZDF-neo viewers can discover what bizarre fruits are produced by the fixation of do-gooders on questions of racism. At that time, the “something-to-do-with-social” theoreticians Juliane Degner and Mark Schrödter, with moderator Amiaz Habtu, intend to drag the “racist in us” into the light of day. The central figure of the TV documentary is Jürgen Schlicher, an unsympatico “diversity management trainer.” His credo is, “Thank heavens it is no longer the case that everyone with a good job in Germany has a German name.”

Moderator Habtu leaves no doubt about where this is headed. At the very beginning, he cites a study to the effect that one-quarter of Germans are xenophobic. “Racism in everyday life is quite subtle, and yet apparent,” And does not support this absurd theory with a single fact.

“Anti-racism training” like this is based on the ideas of the American teacher, feminist and lesbian activist, Jane Eliot. In the 1960s, she developed this experiment, which has since then become a classic of diversity education and conditioned ensuing generations of American children in political correctness.

The Politically Correct Dogmas of a Pseudo-Scientist

Schlicher was Eliot’s student. For his “workshop,” ZDF hired 39 participants, screened by eye color — blue-eyed over here; brown-eyed over there. The blue-eyed are bullied; the brown-eyed are favored. This is supposed to uncover the so-called mechanisms of discrimination. That is, drive out racism with racism.

The participants do not understand the psycho-terror and react with irritation. Apparently because all of them are thinking of the fee they are being paid, none of them stands up against Schlicher’s harsh comments. This, of course, is instantaneous proof for the two social consultants that witnesses do not turn against discrimination because of group dynamics.

Schlicher exhorts the brown-eyed. They are to discriminate against the blue-eyed as — in his opinion — the small, the handicapped, the dark-skinned or the non-Christians are treated in our society. No one contradicts this audacious thesis. Almost all of the participants subordinate themselves to the pseudo-scientist’s politically correct dogmas. This subservient mentality is the most horrifying thing in the entire experiment. There is a bright spot. A number of courageous individuals break away. They are the freedom-loving individuals who will not be manipulated. Unfortunately a minority.

Racism as a German Phantom Pain

Seen in this light, the test given the participants is telling. The brown-eyed are given half of the answers ahead of time. and are then supposed to make fun of the blue-eyed, because they don’t know as much. By doing this, the people in charge are reflecting the degradation of educational standards to the advantage of immigrants. Naturally, they are not really aware of this innuendo, because they believe they have demonstrated the (fictional) privileging of the German middle class vis-à-vis immigrants.

The intention, according to the trainers, is to show “the feelings which people who are disadvantaged because of their skin color, their ethnicity, their religion, their sexual orientation or their gender have to deal with all their lives,.” So, while German youth on the streets and in the schoolyards have been experiencing the opposite of this for a long time, this could now be a phantom pain.

This broadcast also answers the question of what is racist. “A racist incident is an event that the victim or someone else sees as racist.” Ergo, people like Jane Eliot. With this concept, anyone can be made into a racist, or a victim of racism. The broadcast practices exactly that which it warns against in its 65th minute: “Discrimination functions on a simple principle — construction of a clear, stereotypical enemy image.” For “racist investigators,” the enemy is the German racist.

The producers of such training sessions are looking for cut-rate manipulation of participants. But it is worth looking at the broadcast from another perspective. That is, it shows how easily people fall for diversity propaganda.

18 thoughts on “Getting to Know Your Inner Racist”