As we reported on Tuesday, Tim Burton of LibertyGB has been acquitted of “racially aggravated harassment” for his tweets directed at Fiyaz Mughal. The article below summarizing the implications of the verdict was originally posted at Enza Ferreri’s blog. 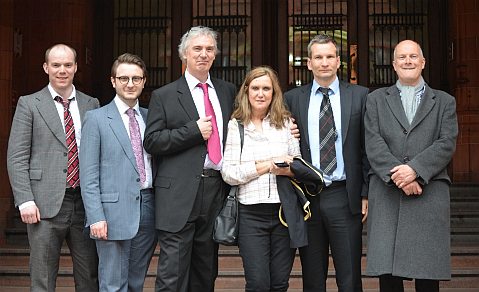 Overall, the acquittal of Tim Burton and the judge’s rulings on the case were a victory on two fronts and maybe not so much on a third.

The judge ruled that a few tweets, even intemperate and even relating to a Muslimperson, cannot be construed as harassment. He clearly said that the Harassment Act was intended for entirely different situations from this one, like stalking somebody or shouting through his letterbox.

He also, if not explicitly accepted, took into account the Islamic doctrine of taqiyya. This can be a turning point for the counterjihad movement. Muslims are generally believed by people in the West when they talk about Islam; in fact they are considered as the experts on this system of beliefs, as one could naturally assume, so they are often asked questions about Mohammedanism by the media in the expectation that they’ll throw light on it and help Westerners to better understand it.

But if the Western public can now gradually come to realise that there is a good, inherent reason, rooted in Islam itself, why Muslims are not reliable and trustworthy sources of knowledge on Islam, the discourse on this pseudo-religion in the West may slowly take a different path.

Taqiyya may now be officially established in the British legal system. Although taqiyya itself may not have been part of the judge’s ruling, what sets a precedent is that the doctrine has somehow been given official recognition.

There is a hierarchy of the courts in the UK. The basic rule is that a court must follow the judicial precedents from a higher court, but it is not bound to follow decisions from courts lower in the hierarchy. Roughly, the hierarchy is:

These are the two victories. Where we didn’t win is in the District Judge’s acceptance that Muslims, although clearly not representing a race in the strict biological sense, can be considered a race when, as a group, treated in a different manner as other groups.

This evidently did not affect his decision, but it shows that the worrying trend of using the terms “race” and “racism” in any way that fits the goals of the politically correct brigade is still alive and well, and supported by even reasonable and intelligent judges like Mr Ian Strongman.

5 thoughts on “The Acquittal of Tim Burton: Good News and Bad News”