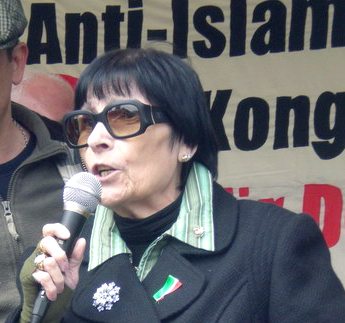 It seems that almost every day we post a fundraising appeal for someone we know who is being prosecuted or fighting a “lawfare” suit because of their struggle against shariah and the Great Jihad. The latest friend to join this unfortunate roster is Adriana Bolchini Gaigher, an Italian activist who is due to appear in court in the next few days as a result of her Counterjihad efforts against UCOII, the Italian equivalent of CAIR. Longtime readers will remember Adriana’s participation in Counterjihad 2007 in Brussels, where she gave the country report for Italy. Since then she has been involved in numerous projects in Italy.

The Lisistrata website has issued an appeal on behalf of Adriana. Many thanks to Gaia for the translation:

In a few days, our Adriana Bolchini of Lisistrata will face criminal prosecution under the lawsuit brought against her by Nour Dachan, President of UCOII in recent years (UCOII, Unione delle Comunità e Organizzazioni Islamiche in Italia, is an Italian Islamic association and probably Italy’s largest Muslim umbrella group). As a journalist, Adriana analyzed and expressed her doubts about the veracity of his intervention in favour of Gabriele Torsello, Italian national, kidnapped by the Afghan Taliban, with whom he got in touch from Italy, via the TV talking in Arabic and taking the credit for his release.

In her article Adriana Bolchini pointed out the ruses adopted by Dachan, that by addressing the Afghan Taliban in Arabic he was basically not talking to anyone in particular, or talking to someone that only he was capable of knowing, because the Afghan Taliban belong to a people who geographically are made up of different ethnic groups.

We ask for your support and financial assistance, as much as you can afford, because as you know, legal expenses do not come cheap. If you support the struggle against Islamic fundamentalism, we must not allow trials to silence us. Help us to continue the fight for freedom.

Please make whatever donation you can afford to her current account at the Banco Popolare Lodi, payable to BOLCHINI Adriana IBAN IT78O0503401665000000001260.