There was a Salafist demonstration yesterday in the city of Duisburg in North Rhine-Westphalia. The gathering was led by the notorious convert and former professional boxer Pierre Vogel, a.k.a. Abu Hamza. The Salafists attacked counter-demonstrators who came to support the constitution and protest against sharia.

Below is an interview from the scene with Jürgen Grimm, one of the contributors to Gegen Islam (“Against Islam”). Many thanks to our German correspondent Klaus von Twickel for the translation, and to Vlad Tepes for the subtitling:

The following photos and text are from the accompanying post, also translated by Klaus von Twickel:

Sharia Terror in Duisburg City — in front of the train station 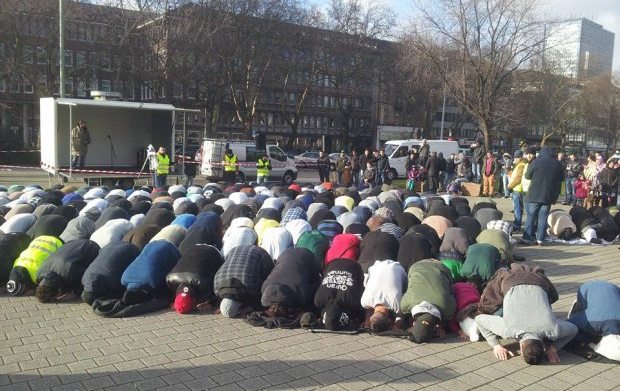 250 fascist supporters of Pierre Vogel this Saturday [22 February 2014] occupied the train station forecourt in Duisburg with radical prayer rituals. As on previous occasions, peaceful counter-protestors who carried banners supporting the German constitution and against Sharia law were attacked. On the stage, Pierre Vogel again agitated against democratic values and the rule of law. Among the counter-demonstrators were Krefeld Islam-expert Michael Höhne-Pattberg and a companion: 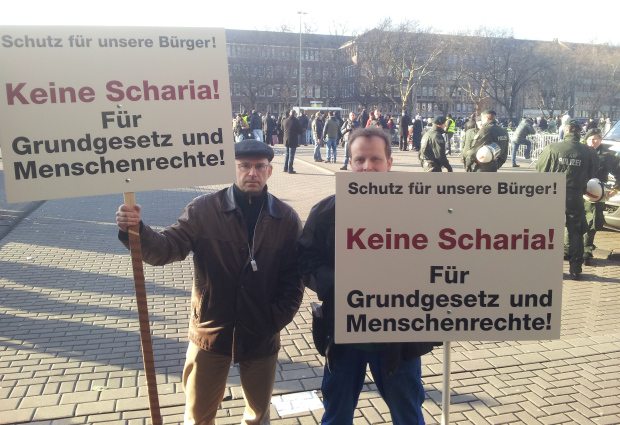 [Banner in photo reads: Protect our citizens. No Sharia! For the constitution and human rights.]

On account of the dangerous situation, these two gentlemen could only show their courageous commitment against the radical Salafists from a certain distance. All the same, they were repeatedly attacked both verbally and physically to the extent that police had to protect them again and again, and had to remove some of the Salafists from the scene. Because the situation worsened over the course of several hours, police buses brought more uniformed officials, the number of police officers increasing to a three-figured one. Many wore steel helmets for fear of Islamic stone-throwers: 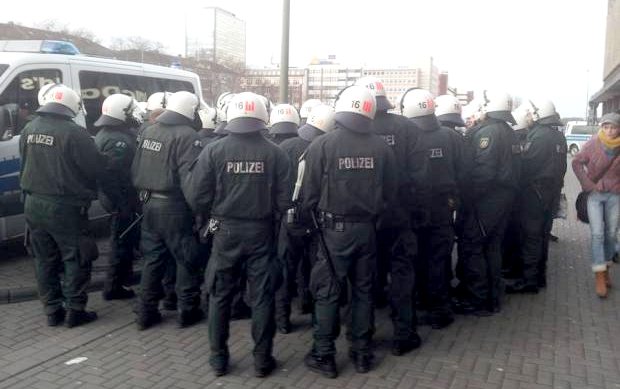 The necessity of such a police operation was shown by the presence among the Salafists of the notorious terrorist Bernhard Falk. The professed Islamist was imprisoned for thirteen years on account of numerous murder attempts. Today he could stroll completely unmolested across the station forecourt, accompanied by his young, Salafist followers. For those that do not know Bernhard Falk, he is the bald, old man with sunglasses! 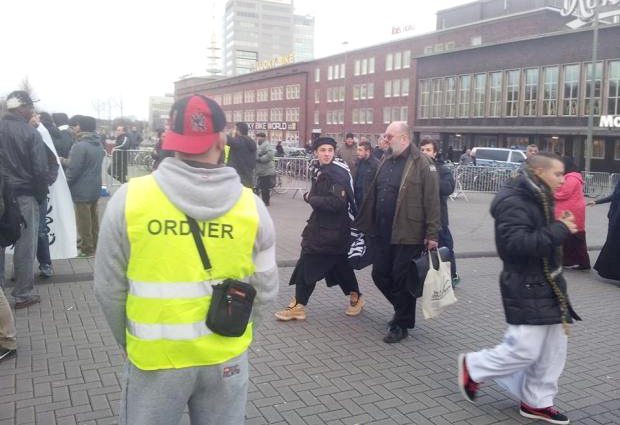 On the other side of the street there were about fifteen far-right counter-demonstrators. These were predominantly expelled members of the National Democratic Party, who, on being questioned, gave extreme anti-Israel and anti-gay tirades, and therefore very similar to the Salafists. At the same time, it must not be concealed that their banners supported a ban of the Koran as well as Hitler’s Mein Kampf 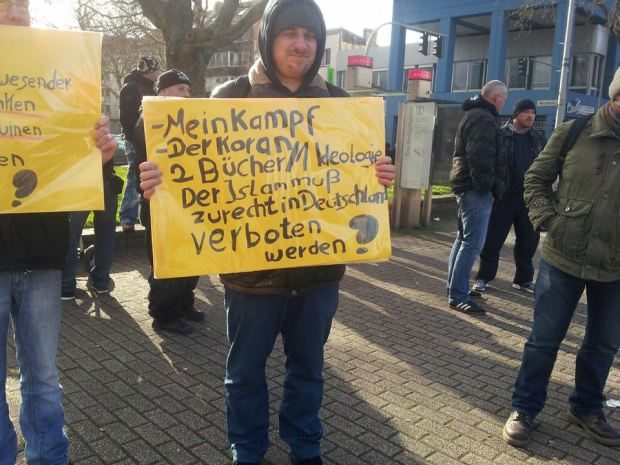 These neo-Nazis were penned in by police behind barriers and were not allowed to go directly onto the station forecourt. The right to remain on the forecourt was only given to Islam-critics who made a clear commitment to the constitution and to human rights, for example the activists Jürgen Grimm and Michael Höhne-Pattberg, as well as their Green-Left colleagues Dr. Daniel Krause and Henning Rothers. These were partly allowed to remain on the forecourt until the end. Dr. Daniel Krause moderated a concluding interview with Jürgen Grimm, who described the situation at the scene as extremely threatening:

2 thoughts on “Salafists Rally in Duisburg”