As mentioned here a few days ago, a group headed by a well-known “British” Islamic firebrand, Haitham Al-Haddad, has reserved the Legoland theme park in Windsor for a day of culturally enriched fun. The news of the upcoming event has caused controversy in the UK, prompting a lot of discussion in the British media.

The most controversial media piece so far was a satire about the Legoland event by Richard Littlejohn that appeared a few days ago in The Daily Mail. Not everybody got the joke, especially leftist readers and those of the Islamic persuasion.

Our British correspondent JP has written an essay about all the brouhaha over Mr. Littlejohn’s satire. 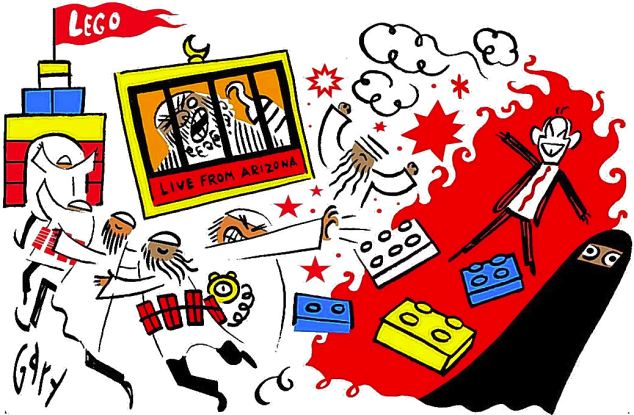 “The author, actually provides us with the itinerary for the day, which makes me wonder why this is relevant again to this story?”

— “So all Muslims who visit Legoland are terrorists, according to the Daily Mail”,
The Huffington Post, 20 February 2014

Satire: the use of humour, irony, exaggeration, or ridicule to expose and criticize people’s stupidity or vices, particularly in the context of contemporary politics and other topical issues.

Awan appears to be unaware — whether genuine or feigned is not clear – of the concept of satire, and therefore treats as factual what is exaggeration to the point of absurdity. Rather oddly, the response to the satire is itself absurd, as if some sort of comic mirroring process has taken place where Littlejohn and Awan form a misshapen pantomime horse pulling in different directions.

The main feature of the satire is an obviously fake itinerary for the Legoland visit which only the most obtuse could interpret as approaching any version of reality for this particular event, yet Awan takes it as such and questions the reason for its inclusion. Without the itinerary there would have been no article, no satire and no opportunity for religio-political humour. Littlejohn’s job is not to supply sober, fact-based reports. Rather it is to present topics in an entertaining, if skewed manner, and this is what he does, article after article, on a wide variety of themes.

Some recent, and it must be said, entertaining articles include Welcome to Kazistan, the Proud to be British quiz 2013, and Springtime for Merkel.

Question 26 of the Proud to be British quiz 2013 may present difficulties for Awan:

26. The Birmingham-based satellite TV station which broadcast a sermon from a banned hate preacher calling for apostate Muslims who become ‘non-Muslim’ to be murdered is called:

Littlejohn does satire. Even the most cursory examination will show this is the case: fake itineraries, dodgy quizzes, and musical ditties are all part of the nourishment. It takes a peculiar type of obduracy, one similar perhaps to wurtzide boron nitrate, one of the world’s hardest materials, not to acknowledge Littlejohn is a satirist.

By the deliberate self-imposition of stupidity for whatever reason, Awan saves himself the trouble of asking to what extent the satire has any relation to reality and why it was written in the first place. To do so would be to admit that however absurd the itinerary with its juxtaposition of a Muslim family fun day with Islamic terrorism, the match is valid given the nature of the group undertaking the visit to Legoland.

It is not news that there is a strong connection between radical preachers and Muslims who commit acts of terrorism. Therefore, to suggest it is Islamophobic is to engage in a double misunderstanding: an inability to recognise satire for what it is, and second, the perception that Muslims should be exempted from criticism, particularly where the attempt is made to link Islam with terrorism. Awan complains that common adjectives used to describe Muslims in newspaper stories include radical, fanatical and fundamentalist. The problem is that many of his co-religionists exhibit these tendencies; to use other adjectives to describe them would not accord with reality.

It is difficult to know how to interpret Awan’s article: he appears to hold an elevated position at a British University yet the assumptions he makes throughout his attack on Littlejohn’s satire betray a lack of awareness of British culture verging on the ludicrous. One is led to suspect that he is pursuing an agenda at odds with the well-being of the Muslim community, or the wider community of which it is a part, on whose behalf he campaigns so vociferously.

The suspicion that there is a well-orchestrated campaign against Littlejohn’s satire is strengthened by reading the twitter feed of Tell Mama. The Muslim Council of Britain (MCB) as well as journalists such as Peter Oborne, and ordinary citizens, were quick off the mark to condemn the satire as anti-Muslim bigotry:

Today @DailyMailUK @MailOnline has published the worst kind of bigotry. It is time to stand up to such hatred.

Normally I’d say ignore trolls like Littlejohn, but that article is borderline hate speech against Muslims. Hope it gets lots of complaints.

The article made me uncomfortable. The writer seemed joyful at the no. of negative stereotypes he could squeeze in

Littlejohn’s story obviously hit a raw nerve. Within three days of its publication, Muslim groups demanded an apology from The Daily Mail. See Tell Mama’s comment on the MCB’s letter to The Daily Mail here and the MCB’s press release of 20 February 2014, which includes the letter co-signed by a cross-section of British Muslims and Interfaith bodies, here.

Littlejohn points the finger at the Muslim community for its at times unquestioning acceptance of practices that have no place in Britain; the response is further evidence for accepting the validity and common sense of this finger-pointing exercise. The Muslim Council of Britain, Tell Mama and Awan insult the common sense of British citizens on many levels: it is clear these organisations and individuals have little time for the at times knockabout and ribald sense of fun which animates our national spirit, where nothing and no one is immune from lampooning. Yet more grievously, their response is dangerous in providing support and cover for the Islamic extremists in our midst.

A further point here is that just as Littlejohn does satire, Muslim community organisations do grievance as cover for their own stealth jihad. A stealth jihad which works hand-in-hand with violent Jihadists to create a pincer movement squeezing our ability to resist Islamization effectively. The Legoland Windsor Resort controversy is a perfect illustration of how this works in practice, and observers of Islam would do well to examine it closely.

Where the satire fails is that there are acute concerns about the ever-present threat of Islamic terrorism, and family members and friends of recent victims of terror attacks whether in the UK or elsewhere, might be justified in failing to see the justification for deploying humour in this way, however well-intentioned. And on sober reflection the article does not appear so funny when reading reports and looking at images of the latest Islamic atrocity in the ongoing war between our way of life and Islam.