A few years ago a culturally enriched asylum-seeker in Switzerland was arrested for seeking the contents of Swiss citizens’ pockets. After slapping the cuffs on the would-be thief, the arresting officer directed a few choice epithets at his prisoner. It’s not clear whether the pickpocket was ever tried or convicted, but the policeman was eventually convicted of racial discrimination for insulting the foreigner. 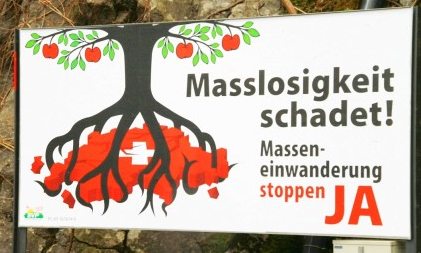 Now the Swiss Supreme Court has overruled the conviction. JLH has translated an article about the case, and includes this note:

I came across this in Politically Incorrect and almost fell down laughing when I realized the Swiss court managed to capsize a PC case by using a combination of common sense with the kind of linguistic sleight-of-hand often used by the Left to get its way. When these judges retire, I wonder if we could persuade them to migrate here and run for office.

The translated article from Blick.ch:

“Crap Asylum Seeker” Is Not Racist

Lausanne: The expressions “Sodding Foreigner” and “Crap Asylum Seeker,” according to the Supreme Court, do not constitute racial discrimination, but are simply insults. And a Basel police officer won his case.

In 2007, at the Basel clock and jewelry fair, a policeman and his colleague apprehended an Algerian asylum seeker on suspicion of picking pockets.

He handcuffed him in front of a crowd of looky-loos and loudly called him a “sodding foreigner” and “crap asylum seeker.”

The Basel court convicted the policeman of racial discrimination for his verbal lapse and assessed the prescribed fine.

The Supreme Court found the policeman to be in the right and overruled his conviction. According to its criminal division, the comments lacked the reference to a particular race, ethnicity or religion that is requisite for discrimination.

The terms “foreigner” or “asylum seeker” may refer to people of quite varied geographical origin or religious beliefs, it said.

The court went a step further: Even the use of the terms “sodding” or “crap” in connection with a particular nationality or ethnicity would not, according to the judges, constitute racial discrimination.

Concepts like “sodding” and “crap” had been used since time immemorial in German-speaking areas and widely used as expressions of protest.

Such expressions were perceived as mere insults, not assaults on human dignity.

At any rate, so long as such an expression was directed at individuals, it would be regarded by a neutral third party not as an assault on human dignity, but more less as a primitive, xenophobically motivated slander.

Insults uncalled for and unacceptable

To be sure, the comments by the policeman in performance of his duty were unusually uncalled for and unacceptable.

This concerns only the measure of guilt in the context of the factual findings regarding this insult. Whether the police officer can also be convicted for that, according to the court, is not for this procedure to decide.

The case now goes back to the Basel court for a new decision.