An article about Geert Wilders was published last Friday in The Wall Street Journal. Below are some excerpts:

THE HAGUE—A leading critic of the European Union called on fellow euroskeptic parties to join forces to reassert national sovereignty against Brussels. 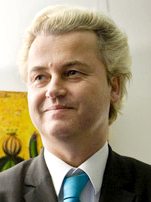 Geert Wilders, leader of the Dutch Party of Freedom, said such an alliance is difficult but that he hopes anti-EU parties, which are expected to make gains in European Parliament elections in May, will try to form a coalition after the vote.

“These elections are more important than ever,” Mr. Wilders said in an interview with The Wall Street Journal. “It will be a disgrace if we aren’t able to join forces.”

Mr. Wilders is set to become a pivotal figure in the May 22 elections because of his ambition to build an alliance of anti-EU parties, led by France’s Front National of Marine Le Pen and his own Party for Freedom. So far, only a handful of parties in other countries, including Belgium, Austria and Italy, have signaled willingness to participate in such a coalition.

The European Parliament, with 766 members from 28 countries, is the only democratically elected body of the EU. It has assumed more influence in recent years, giving it a greater say on a Europewide issues.

Election polls show that euroskeptic parties on the left and right could win up to 30% of the vote in May, amid widespread dissatisfaction over the region’s economic crisis and years of austerity. If some agree to cooperate and set up an alliance, as Mr. Wilders is hoping, it could become a new force in European politics. The prospect is unnerving to national governments as it could further complicate EU decision making.

Mr. Wilders’s own party is pushing for the Dutch government to take back powers from the EU ranging from immigration to fiscal policy and ultimately wants an exit of the Netherlands.

Some observers are doubtful whether Mr. Wilders and Ms. Le Pen can pull it off. Previous efforts to set up a an anti-EU movement proved unsuccessful as parties struggled to overcome national rivalries and conflicting views on policies ranging from immigration to gay rights.

In recent years, Mr. Wilders shifted his focus to the economy and Europe. He was a fierce critic of euro-zone bailouts and wants the Netherlands to leave the EU. Earlier this month, he published a much-criticized report that claimed that the Dutch economy would benefit from a withdrawal.

While the Netherlands is one of the founding nations of the EU, surveys show that the Dutch have a mixed view on it. A January poll from Dutch pollster peil.nl found that nearly 60% of those polled thought the EU is on the wrong path and isn’t properly handling Dutch interests. Moreover, two-thirds of those polled would want a referendum if more powers would be transferred to Brussels.

“People are still angry,” Mr. Wilders said. “They have the feeling that they weren’t taken seriously.”

2 thoughts on “May 22: D-Day for the Euroskeptics”