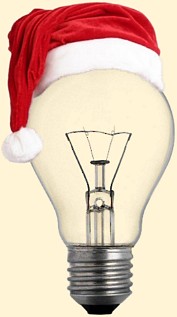 That’s because December 31, 2013 is the final day on which such bulbs may be legally manufactured in the United States. Manufacturers have already distributed the last of their stocks, and the remaining supplies are being rapidly depleted.

Congress, in its infinite wisdom, gave us plenty of warning on this one. The law was passed in 2007, providing those of us who were paying attention plenty of time to stock up on those evil electricity-guzzling incandescent light bulbs. I’ve been in the habit of picking up a pack or two of the sixty-watt variety every time I visit Dollar General. I’ve filled the top shelf of our pantry with enough of them to make Al Gore breathe a gout of fire in our direction if he ever finds out.

A couple of weeks ago Dollar General ran out of the sixties, but still had a few forty-watts on the shelf. I picked up the last two packs of sixty-watts at Food Lion yesterday. There weren’t any left in the other grocery store in the little town nearest to us.

My plan is to have enough to wait out the indefinite period before Congress is compelled to repeal their asinine law. It’s likely that many Americans aren’t even aware of what has been done to them, and won’t discover their predicament until they go to buy light bulbs sometime in the next few weeks. The average American is already pretty sore at the government for various other indignities and atrocities that have been imposed on him in the past few years, and the absence of light bulbs may well be the final straw. I hope.

The two types of alternative bulbs that are at least tolerable cost from four times as much (halogen) to fifty times as much (LED). But what the government really wants you to do is buy those curly Al Gore specials, the compact fluorescent lamps (CFLs).

CFLs have several disadvantages over the alternatives. They give off an ugly color of light, providing your living room with the look of a sales aisle in Walmart. They tend to burn out quickly if you turn your lights on and off more frequently than the government recommends. And they contain mercury, which means that when you tip over a lamp in the living room, you’ve got a nasty surprise lurking in the nap of your carpet, even after you’ve cleaned up all the broken glass. You can’t tell it’s there, but your rug rat’s little nervous system sure can!

But, hey, what’s a little mercury poisoning when you’re saving the planet?

I have my own personal reasons for disliking fluorescent lights, in addition to the problems described above. My eye condition (macular degeneration) has made me sensitive to flickering lights, and fluorescent bulbs definitely flicker. Incandescent bulbs give off a constant glow, because their light is produced by the heating of a filament, which continues to glow even while the alternating current is switching directions. CFLs, however, flick on and off with the alternation of the current. The effect is subliminal — it occurs at a rate faster than your eye can process directly — but it is real, and it becomes perceptible when multiple fluorescent bulbs are on simultaneously. The interference patterns among the different light sources are enough to cause a noticeable shimmer. I didn’t pay any attention to the effect until my eyes went bad, after which I started noticing that a trip to the supermarket became agonizing after just a few minutes under those multiple fluorescents.

So no CFLs for me! I’ll buy those expensive bulbs rather than subject myself to that sort of punishment in my own home. But we’ll see how long that shelf full of good ol’ sixty-watt incandescent bulbs lasts…

When I went through the checkout line at Food Lion yesterday afternoon (two packs of sixties, two packs of forties), the sales girl wished me a “Merry Christmas”. I noticed it because you don’t hear that very much anymore, especially in the larger towns and cities. But we live in the back of beyond — actually, we live even farther out than that; we have to drive eighteen miles just to get to Beyond — and people out here haven’t entirely abandoned the old ways. Most retailers and government departments have sent out the word for their employees to substitute the vile “Happy Holidays” instead, to avoid offending any atheists, Buddhists, or Wiccans who happen wander by. But their directives haven’t trickled in to the outback. Even the lady in our post office sometimes forgets herself and uses the C-word.

Whenever I hear the “Holidays” substitute, I respond by wishing the other person a merry Christmas. More often than not she will smile and return the greeting, as if pleased to be reminded of the proximity of Christmas.

In a lot of places that checkout clerk could have lost her job for daring to mention the birthday of Jesus Christ. But not out here.

The past is a foreign country. We do things differently here.

Right Side News has a useful report about the end of the incandescent light bulb.