Seneca III concludes his three-part account of the Siege of Rhodes in 1522. Previously: Part 1, Part 2. 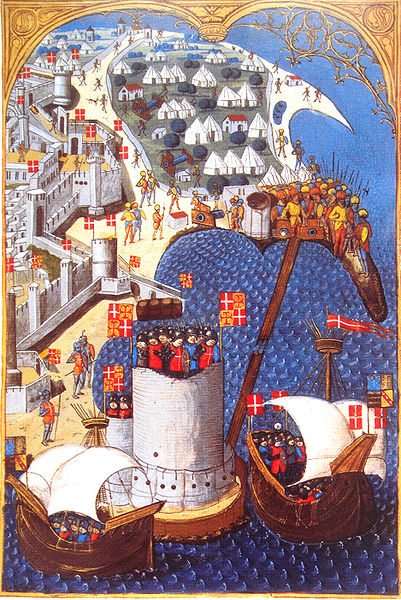 The Cross and the Crescent: Rhodes, 1522
by Seneca III

That the siege would now extend into winter was no more desirable from the point of view of the Knights than it was from Suleiman’s. Although a single boatload of reinforcements and supplies had got through in August, the blockade had tightened. This is hardly surprising, considering that upon hearing of the blockade runner Suleiman had Cortoglu strapped to a plank and bastinadoed[2] on the deck of his own flagship and the diligence of the fleet in carrying out its duties thereafter closed Rhodes to any help that may have come from Europe. Secondly, and just as seriously, Gabriele Tadini had taken a ball in his right eye. The ball had exited above his ear, taking a piece of his skull with it, and leaving him disabled and confined to the hospital for six weeks whilst Suleiman’s miners continued their activities unhindered.

By October winter was truly upon Rhodes, and food and powder were in short and ever diminishing supply. The bombardment and attacks continued unabated throughout that month and November, the rain leaving the shattered ramparts slippery with mud and blood. By December the courageous Rhodians, confined to the hell of that tiny city for five months and lacking the fanatical religious motivation of the Knights, had no more spiritual stamina to draw on. When Suleiman offered honourable terms, the people of Rhodes informed De L’Isle Adam that if he did not accept, then they would. The Grand Master was of the old crusader spirit and would have none of it, but events had overtaken him. He was forced to listen to the counsel of those who advocated living to fight another day, and in the end capitulated.

Thus, on the cold, snow-flurried morning of January 1st 1523, De L’Isle Adam and his surviving Knights, almost all wounded[3], left Rhodes in the great carrack Sancta Maria and three other vessels and sailed out onto a stormy sea. They took with them their weapons, except for the cannon, their personal possessions, the archives of the order and their Holy Relics under the generous terms Adam had negotiated with Suleiman.

And, indeed, how generous these terms were for both the Knights and the people of Rhodes, but such chivalrous magnanimity was not out of character at that point in Suleiman’s life. He was himself a warrior and, albeit at great cost (at least 50,000 of his force had been killed outright, died of wounds or succumbed to disease), had succeeded in taking Rhodes where the forces of his grandfather, Mehmed II, under the field command of Gedik Ahmed Pasha, had so ignominiously failed. Compared with the backstabbing, quarrelling often militarily incompetent Kings and Princes of Europe, the conviction, courage and fighting skill of the Knights and their retainers is something he could easily admire. There is little doubting the genuineness of his sentiments when, as was reported, he turned to his Grand Vizier and said “It saddens me to compel this brave old man to leave his home.”

That, however, was a state of mind and course of action he would come to regret and never repeat as his declaration before the Divan of 1564 initiating the Great Siege (Malta, 1565) demonstrates — “Those sons of dogs whom I have already conquered and who were spared only by my clemency at Rhodes forty-three years ago — I say now that, for their continual raids and insults, they shall be finally crushed and destroyed!”.

Viewing the events at Rhodes from the perspective of several hundred years, it is not stretching credulity to consider that the courage and selfless determination of the Knights, their Sergeants at Arms, their small mercenary force and the people of Rhodes, coupled with the genius of Gabriele Tadini, sowed the seeds that became the breeze that became the Christian wind that defined the course of history in the Mediterranean and much of Europe to this day. Had the defenders not held out as long as they did — in no small part due to the work of Tadini — Suleiman would probably have breached the defences before the onset of winter; had this been the case the Order would have ceased to exist, for the Knights, as they had done so many times before, would have fought to the death. Fortunately, as it eventuated, the Order survived to find a new home and rebuild its manpower, and the Monks of War and the armies of Suleiman would meet again in Malta some forty-odd years later with a very different outcome. Yet again, during the time of his son and successor Selim II (a.k.a. ‘Selim the Sot’), at Lepanto in 1571 as part of the victorious Christian fleet under the command of Don John of Austria, and these distant events must surely carry with them a message as relevant today as it was in the 16th Century.

To explain: I have long felt that a knowledge of and a non-revisionist interpretation of history are keys that can be used to open many of the possible doors that lead into our future, and that it is axiomatic that whichever door the key holder selects is a function of his or her particular mind-set, of his time and place and of his societal conditioning, particularly in respect of how he has been educated (or indoctrinated, if you wish), and by whom.

Consequently it is my hope that this short potted history of one battle, and its copious notes, will have in some small way illustrated how little the motivations for and the conduct of Jihad have changed in their general form and how, if we look around us, we can see reflected in their modern incarnation only slightly variant forms of many of its particulars — an addiction to slavery, mass suicidal tendencies reflecting an unreconstructed belief in the deviant, chauvinistic pleasures of the Muslim paradise and a total disregard for human life and its values in general, both of those souls within the confines of the iron cage of the Umma and of those others unfortunate enough to find themselves subject to its depredations. And, most of all, it illustrates what fortitude we in the West will have to muster if our response will be sufficient for us to survive Islam’s onslaught. It is with this thought in mind that the last paragraph of Part I was (re)written in such specific detail.

— Seneca III, Rural England, 17th October 2013 CE: far from the madding hives of the urban ‘occupied territories’ we will soon have to deal with, but still too damn close for comfort.