The translated writings of Necla Kelek, a secular German Muslim, have appeared several times in this space in the past. The opinion piece below, which proposes to remove Islam from the grip of the traditionalists, was originally published in the German MSM and has been translated by JLH.

Necla Kelek is a highly educated, thoroughly assimilated Muslim woman, whose books and articles in various organs of the press speak with common sense and unassailable scholarly command about Islam in Germany.

It is interesting to see how careful she is to explain terms such as “halal,” and supply alternate, clarifying terms for imam and sharia. It argues that her target audience is neither the convinced multiculti, nor the well-informed Islam critic, but the intelligent but naïve middle class who still read and believe the newspapers, but have very little knowledge of the working of the parallel society. Possibly also the “silent majority” of Muslims she implies.

Take off the Headscarf! 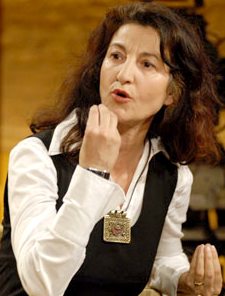 For years, the Islam Conference has concerned itself with questions of religion. How its functionaries can improve the lives of girls and women is of no interest to them.

It is very telling: the German Islam Conference (DIK) makes no recommendations for advancing the equality of boys and girls. They prefer to work things out by relying on the law of their forefathers. Apparently the DIK is relying on pacifying the Muslims in Germany by strengthening the religious groups. The prevailing conflicts are being moderated — symbolic politics are being practiced. Integration is seen as social work. This attitude is visible in the latest round of the Islam Conference. There should have been a discussion of how the situation for girls can be improved. I consider three aspects decisive.

Secular Muslims should resist allowing others to interpret their religion. What this means can be tested in everyday examples, but also in other, extreme examples. An everyday example is whether “religious rules” like the Muslim ban on eating pork affects the menu in school cafeterias. No one is forcing a vegetarian or a Muslim to eat a sausage. In practice, however, it is not that the first does not eat lamb sausage and the other does not eat pork sausage, but rather that the common mealtime is undercut. The presence of the porky sausage contaminates the whole place. As a Muslim, it is not permitted to sit at the same table as a “pork gobbler.” I have seen how Muslim women’s groups refused to attend an Advent coffee in the Christian community, because they would have to eat something that had been prepared in the “impure” community kitchen. There are school cafeterias where only “halal” — i.e., kosher — foods are offered, and all service is halted during the month-long fast of Ramadan. In short, the “religious rules” are not experienced individually, but claimed as a collective right. Should we not rather draw a line between the worldviews of various cultures and the elementary principles of the secular constitutional state? I think so!

A different area is the function of the peace judges in Muslim communities. Their effect has long been ignored by politics and jurisprudence. Not until the television journalist Joachim Wagner published his profound report on the Islamic parallel justice system, “Judges Without Law,” was there some debate. Which, however, degenerated to talking it down. That is, peace judges, or conciliators, are something like mediators who assume the work of the judiciary in doubtful situations and contribute to peace in society. What that argument ignores is that the mediation or judgment is closely tied to Islam. Upon inquiry, the mediation in the mosque allegedly has to do only with family affairs. But there is sufficient evidence that the prayer leaders also intervene in criminal matters, and assure that the concepts of Muslim masculine honor are satisfied. The drama of such a shadowy justice system does not seem to have been noticed in politics. When “religious life,” i.e., sharia is accorded factual, legal standing, it is difficult to defend against the vigilantism of the clans, even though the mantra is intoned that the constitution is valid.

Of the by now more than 4 million Turkish-Muslim citizens in Germany, most do not live in the parallel world. They are an important part of the society. There are writers, film-makers, doctors, business people, crafts workers, etc. Most of them do not agree with the parallel society. Their voices must be heard at last. That does not mean destroying Islam. Every single Muslim can find his or her place as a citizen in German society without relinquishing the meaning and variety of Islamic faith and rituals. I hope that exactly this will happen in Germany.

15 thoughts on “Take off the Headscarf!”