Our Israeli correspondent MC presents an outsider’s look at one facet of the current IRS scandal. 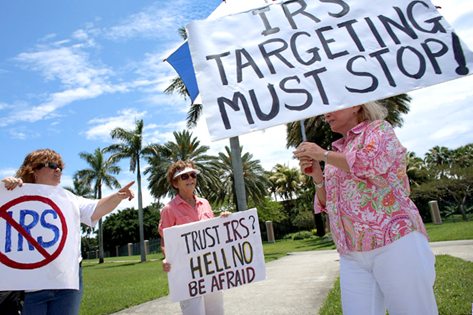 So now we have it, as the case spins out, and we find that the IRS has been targeting specific types of US citizens for their beliefs for years.

Kent Hovind was gaoled by the IRS for ‘structuring’. He was given a ten-year sentence, of which he has now served five years in a federal penitentiary.

Kent was and still is a Christian evangelist known as Doctor Dino who ran (and still runs) a successful mission and theme park in Florida.

‘Structuring’ is taking money out of a bank account in such a way as to try to avoid scrutiny by money-laundering and IRS officials, and where all transactions of $10,000 and above are reported. These laws are in place to try to make life difficult for drugs cartels and other criminals, not to persecute Christians.

Here is a Forbes article that explains the case far better than I ever could:

Apparently having been tried and convicted and his appeal turned down, he still thinks that he can get the indictment overturned. He just does not see how it can be a crime to take money out of the bank to pay the expenses of his ministry.

Is What The Government Doing A Good Idea ?

Despite his claim to the Creations Science Hall of Fame that he is not a tax protester, Mr. Hovind at different points in time has made the type of statements associated with protesters and based on the outcome of civil litigation had not been filing returns. He was pretty well trounced in Tax Court and it is possible that going after him criminally was superfluous, but I have never been able to discern why it is that some cases rather than others go criminal. Assuming that it made sense to go after him criminally, I imagine the reason for the structuring charges is that they are much easier to prove and having so many of them makes quite an impression on the jury, but I’m not sure it is sending the right message. The structuring conviction can be painted, as it is in this article, to make Kent Hovind look like a victim.

There has always been this delicious irony about gangster Al Capone finally being convicted of income tax evasion rather than the multitude of other crimes that escaped punishment. Somehow convicting Dr. Dino (as Kent Hovind is known) for taking his own money out of the bank rather than for income tax evasion just does not seem as satisfying.

Hovind never withdrew $10,000 a day, typically he would withdraw $9500 to pay costs etc. But apparently the IRS feels that this too is ‘structuring’ and ‘bent’ the law accordingly.

Now that the dishonesty of the IRS is coming to the fore, and how many other American citizens have been given long prison terms on dubious technicalities?

As a total outsider — an Israeli Jew of British decent — it seems that the whole IRS scandal stinks of cesspit politics and of the targeting of personal enemies by corrupt civil servants. It is obvious to me that the IRS has been allowing staff to pursue personal vendettas for many years, and that this policy was seized upon by corrupt administrations as a way to settle old scores and to starve the opposition of funding by deterring campaign donations.

I may well be wrong, but the evidence seems to be there, there appears to be evidence of collusion between the IRS and the Justice Department. The land of the free and the home of the brave has wilted somewhat just recently.

I have loved the USA since I first read a Zane Grey novel (I think it was Nevada) in the fifties. Reading Michener brought home the wisdom of the founding fathers, and Leon Uris (Battle Cry), the bravery of the 1st Marine Corps at Guadalcanal and again at Tarawa. The whole Pacific theatre of WW2 is the most amazing example of what a great nation devoted to Liberty can achieve.

Against that greatness I see a smutty and small minded government department abusing the trust of the very people that it is there to serve, aided and abetted by a thoroughly corrupt administration that this great nation just does not deserve.

There can be no two tier system of cronyism in the Department of Justice. There is not one law for Democrats and another for the rest. It is time for honest Democrats to stand up and admit that they have been had, and then assist in the purging of the sewers of modern power.

This administration has sown the sweet airs of a great nation with a toxic seed, it is well-nigh time for them to reap the tornado of that nation’s repudiation.