Don Laird is a regular reader who lives in Alberta, and keeps us on his mailing list for news and commentary. Yesterday he witnessed and photographed an unusual event in Edmonton, and sent out an email about what happened early this morning. It was an event that Counterjihad regulars are quite familiar with: blatant and public Muslim antagonism towards gay people. In this case, an occurrence that would have caused front page headlines and landed a non-Muslim perpetrator in jail is downplayed and hushed up because the crime was committed by culture enrichers. Furthermore, an attempt to photograph what happened elicited a thinly-veiled threat by the authorities.

Edmonton is obviously in a state of extreme denial about the nature and agenda of Islam.

With Mr. Laird’s permission, his entire report is reproduced below, plus one of the photos included with his email:

Today I was in Edmonton for a few hours. At about 8:30 pm, after finishing supper, I was driving westbound on Jasper Avenue near 117th Street.

As I travelled west I noticed on the south side of the street a red car with both its front and rear windows smashed out. There were large signs attached to the car that read “Gay Bashed by Islamic School”. A large crowd had gathered and in addition to several police cars in attendance there was a tow-truck hooking up to the red car getting ready to tow it. 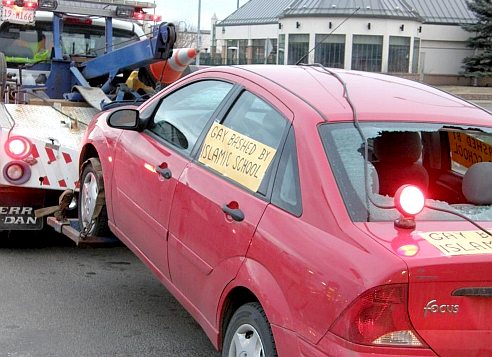 I pulled into a driveway and got turned around. I pulled up beside the tow-truck just as the driver was about to get in to the truck. I got the driver’s attention and quickly explained that I was quite interested in the story, that I did some writing and wanted to take a couple of photographs of the car and the signs attached to it. The driver said “no f***ing way man, I’m outta here now.”… I pleaded with him and he ignored me.

I pulled over and got out to get my camera from the trunk. I just had it and the tow-truck driver roared away. I followed him and when he stopped at red lights I took some photographs of the car. This provoked a ridiculous response from the tow-truck driver who screamed at me out his window saying that “I wasn’t allowed to photograph the car as it was “police property now”…the driver then sped away and at one point pulled away from me at a very high rate of speed through a residential section with the red car swaying and swerving wildly behind him…I caught up at the next light and took some more photographs.

As I was getting in to my car the tow-truck driver had raced through a yellow light leaving me to stopped at the intersection with an Edmonton Police Service cruiser pulled up behind me. The driver had called the police because I was photographing the car, a fact later confirmed by the dispatcher for Double L Towing of Edmonton. The police cruiser waited behind me until the light changed again and by that time the tow-truck was gone. The cruiser did not stop me.

I went back to the area where the car was originally parked. It turns out the car was parked in front of a gay bar called Buddy’s located at 11725b Jasper Avenue.

I started to ask around and no one seemed to eager to explain what happened. A striking facet to my conversations with some of the patrons from Buddy’s, standing outside having cigarettes, was their offered mitigation and excuse of the Muslim vandalism to the car. It was a stunning case of Stockholm Syndrome.

Many of the patrons whispered that they were afraid and didn’t want to make any comments on or off the record.

The owner took the car and applied the signs and parked it in front of a popular Edmonton gay bar. The purpose in parking the car in front of the gay bar was to send a message that Muslims will become extremely violent should they disagree with anyone on points of a political and cultural nature. The police removed it as the car “was attracting too much attention”.

The car was towed by Double L Towing, Unit 135, to the Edmonton Police Service vehicle impound yard at 124th Street and Yellowhead Trail. The vehicle is now part of a criminal investigation that the Edmonton police are being very, very tight-lipped about.

I am quite interested to hear the details on this case as it unfolds.