Last month we featured an original-source report by Don Laird on a culturally enriched act of vandalism by Muslims in Alberta. Mr. Laird is back with an account of an incident in an Edmonton truck stop that looked suspiciously like a “Mohammed Atta moment” — that is, devout Islamic activities immediately prior to martyrdom.

The following report was sent out today by fax to law enforcement agencies and other appropriate recipients.

The information in this fax relates to a potential Muslim/Islamic terrorist threat to both Canada and the United States of America.

IF YOU HAVE RECEIVED THIS FAX IN ERROR PLEASE IMMEDIATELY FORWARD IT TO:

The information in this fax relates to an incident at the Road King Truck Stop located at the corner of 170th Street and 118th Avenue in Edmonton, Alberta, Canada. While a seemingly mundane and innocuous incident, when examined there are facets which give rise to legitimate concerns relating to Muslim/Islamic terrorist threat in the form of the logistical and administrative support of terrorist action within North America.

At approximately 10:30pm on the evening of May 13, 2013, I entered the Road King Truck Stop at the above location. I had been in this same truck stop each night at about the same time for the previous 2 nights.

I had not been to this truck stop in many years and upon my first visit noticed several changes, primarily a new restaurant and new owners. In addition, while in the Road King I had observed numerous Middle Eastern men who were obviously Muslim. These men stood out owing to their manner of dress and beards. specifically; skull caps and an unkempt style of beard favoured by orthodox Muslim men, in particular, the Salafists and Al Qaeda types. This was highly unusual as I had never seen these type of men frequenting these areas before.

On the third night after entering the truck stop I went to the washroom. There were two toilet stalls, urinals and a row of 3 sinks with mirrors. As I was using the urinals a man entered and began using the sink to perform Islamic ablutions. These ablutions included the washing of his feet in the sink. There were several other non-Muslim men in the washroom who raised eyebrows but said nothing. 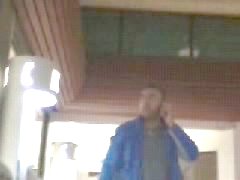 I waited outside the washroom from a distance and watched the man as he left. He walked down through a large area towards the convenience store/fuel desk. He stopped at one of the Telus payphone kiosks and sat down and started making a call on his cell-phone. I sat down at the kiosk next to him and made a telephone call on the payphone. He turned, looked in my direction and then stood up and started walking toward the rear exit of the building that led to the truck parking area at the rear of the truck stop.

I followed him out and from a distance watched which truck he got into. Parked beside the truck the man entered was another truck belonging to H & R Transport. The H & R truck was being worked on by 2 drivers. I walked over and talked to the H & R drivers. During the conversation with the H & R drivers I wrote down the information relating to the Middle Eastern man’s truck.

During my conversation with the H & R drivers I watched another man get out of the Muslim truck. I had seen this man on a previous evening wandering around the truck-stop. It appeared there were two men in this truck and they possibly were running a “team driving” operation. During my conversation with the H & R drivers both Muslim males had gotten in and out of the truck for brief periods of time and appeared either concerned or interested in our presence in close proximity to their truck.

After finishing my conversation with the H & R drivers I went back into the truck-stop and was surprised to see the same man I had initially seen in the washroom sitting at the same Telus telephone kiosk using his cell-phone. I sat down in the kiosk behind him. After a few minutes he turned and saw me sitting behind him again. I had a camera out and took video of his face. After a few minutes he got up and left. I noticed a telephone book open on the desk of the payphone kiosk, it was a Yellow-Pages and was open to “Columbus Pizza and Donair”. I was using the payphone and I lost sight of the man for about 30 minutes and then saw him again walking into the same washroom where I originally saw him. I did not see him with a delivery from Columbus Pizza and Donair. I left shortly after.

Lettering on side of truck indicates truck is owned by a numbered company registered in Quebec, Canada, “9259-5503 Quebec Inc”

Truck is registered as running between the points of Houston, Texas, USA and Vermilion, Alberta, Canada.

There also appeared to be another truck related to these two men, parked in front of the white Volvo. It was a white “Freightliner” with a Quebec licence plate on the front #L595191

There were a number of warning indicators that something was wrong with what appeared to be an innocuous truck in a truck stop.

Photographs and video of the man in question were taken and are available upon request.