This is the last of three translated articles about the occupation by “asylum seekers” of the Votive Church in Vienna. Previously: Introduction by AMT, Part 1, Part 2.

The article below was published on January 30 at Andreas Unterberger’s website. Many thanks to JLH for the translation. 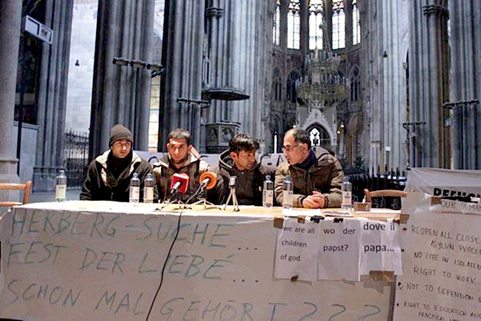 Church of the Extortionists
by Andreas Unterberger

The Church in Vienna really has a strong leadership. Every day it goes full speed ahead in a different direction.

For a whole day, Christoph Schönborn said what the majority of Viennese Catholics are thinking. He showed true anger at the occupiers of the Votive Church. The next day, he was already headed back in the opposite direction, on the leash of the Far Leftists of Caritas and its PR people. They apparently believe that the Church is acting rightly by allowing several MSM outlets to make a fool of it on a daily basis. At any rate, Schönborn once again took the side of those who want to blackmail the republic and force it to change its laws, Which the evil republic is not willing to do — at any rate not yet.

We can at least be happy that the church occupiers are not doing in this situation what is an old and beloved custom in their Afghani and Pakistani homeland — snapping on an explosive belly-belt and blowing it up if they don’t get what they want. After which they will apparently meet their 99 virgins.

So Schönborn is no doubt right to be filled with submissive gratitude. Our dear occupiers haven’t even disturbed the mass. That really makes us happy.

And the next day, the Cardinal can enter his cathedral without a care. A whole company of guards are there to protect him against visitors like the ones who are gladdening the hearts of the parish of the Votive Church. Aside from that, he clearly knows just one thing: nobody is leaving the church. Although it would require only a short visit by the police. But he is convinced that the thing can be resolved by a good conversation.

Until then, Caritas — financed by Church donations — will care for our valued guests. And the Church will not even turn off the electricity, which (you guessed it) is also paid for by the Church. So our valued occupiers can continue using the laptops and earphones already kindly put at their disposal. But please, my dear Cardinal, you have forgotten something — electric blankets and heaters. It would really be too bad if you could not provide them.

The Votive Church scenario is reminiscent of the TV discussion days ago, when ORF opposed three passionate partisans for the occupiers to one actual opponent (and an ex-Caritas man who pretended to be neutral). Luckily, a very poor man from Sierra Leone was fetched out of the audience. He has been living here for 14 years and apparently does not even know that help is being desperately sought in the tourism industry — a job that he could at least take as a seasonal employee, should his asylum process last that long. Of course, he has done nothing to prolong it.

The whole occupation scandal is also reminiscent of the university occupations of recent years. The first time, a rector was intimidated and watched the nonsense going on for weeks, and even donated to the occupiers, which added a loss of 4 million to the already impoverished university. The next time, his successor made short work of it, closed off and cleared out the university, and it was all over without a blip. Not even the diverse leftist weeklies had time for a dramatic production. Maybe someone should tell the Cardinal about that. Maybe in the process he could be educated to the fact that the great majority of the occupiers are asylum applicants who have already been rejected and/or know that they are facing an imminent legal decision. Then he could at east speak a little more truthfully in that regard

12 thoughts on “Church of the Extortionists”