This is the second of three translated articles about the occupation by “asylum seekers” of the Votive Church in Vienna. Previously: Introduction by AMT, Part 1.

The article below was published on January 28 by Junge Freiheit. Many thanks to JLH for the translation. 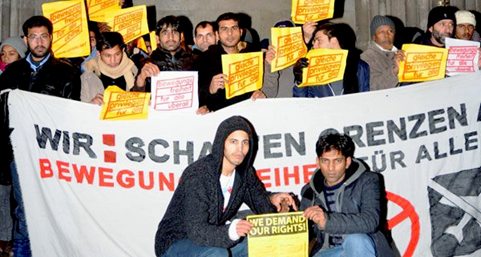 Vienna — Viennese Cardinal Christoph Schönborn has accused leftist lobbying groups of inciting asylum seekers to occupy a church. What he said was that they were “abusing the refugees’ desperation to further their own ideology.”

The background to this is the occupation of Vienna’s Votive Church, which has now lasted for weeks — on the model of the so-called refugee camps in Germany. The second-tallest church building in the Austrian capital was occupied in December by asylum seekers, some of whom were facing deportation, and is no longer accessible to the public.

Yet Another Hunger Strike This Week

The demonstrators sporadically engaged in hunger strikes and have announced the resumption of that activity for February 1st, should their demands not be met. Among these — next to improvement of their personal situation — are general demands for a change in Austrian asylum law.

Critics of the church occupation say that German and Austrian asylum activists are behind these demands. This was the opinion of the Vienna chief of the FPÖ, Johann Gudenus, about “German professional demonstrators” who “are allowed, arm-in-arm with asylum defrauders and under the benign gaze of Red-Green, to occupy churches.” The church leadership, on the other hand, reacted sympathetically at first to the church occupiers. Cardinal Schönborn even visited them and appealed to politicians to keep in mind the “difficult situation” of these people.

Four weeks later, the Vienna church primate had had it. “These ideologues will stop at nothing,” he said of the activists who had urged the immigrants on to the occupation, They would not “dirty their hands” nor were they offering any concrete assistance, as the church was, he said. Previously, negotiations for the peaceful withdrawal of the asylum seekers to proper shelter had apparently collapsed.

Next: Church of the Extortionists.