Last week a group of Counterjihad bloggers from both sides of the Atlantic attended the Human Rights Conference in Geneva. Below is a report on the occasion by Elisabeth Sabaditsch-Wolff, who represented Bürgerbewegung Pax Europa at the event.

Her account was originally published in German at Politically Incorrect, and has been kindly translated into English by JLH. See the original for additional photos.

BPE At the Human Rights Conference in Geneva

On February 19, 2013 in Geneva, not far from the seat of the UN and only one day from the site of meetings of the (in)famous Human Rights Council, a conference on human rights and democracy took place. UN Watch served as the organizer under the supervision of the Canadian Hillel Neuer and a consortium of human rights organizations from all over the world.

This year was already the conference’s fifth meeting. Participants, among others, were ambassadors accredited by the UN, representatives of the soroptimists,* human rights activists and other interested parties. 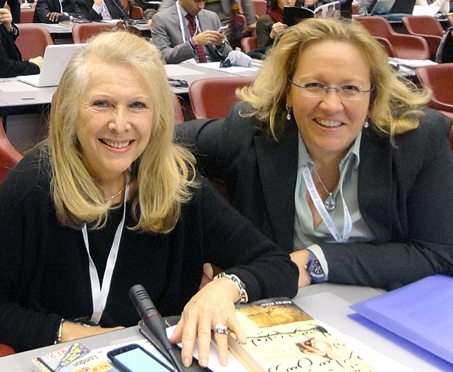 The theme was human rights persecutions in Iran, Syria, Morocco, Cuba, Kazakhstan, Mauritania, Russia, North Korea and Tibet. Although all the human rights abuses of these states were known, we — representatives of Bürgerbewegung Pax Europa, ACT! for Canada and the International Civil Liberties Alliance — questioned whether the organization seriously believed that everything in Europe was fine. None of the many known European dissidents was invited, or given a chance to speak. One could imagine that Europe, insofar as human rights are concerned, especially freedom of expression, is one of the blessèd isles. Not a word about how the right to assemble in Great Britain (viz. EDL), Austria (viz. demonstrations of leftist extremists about the allegedly rightist extreme “Academic Balls”) or in Germany (viz. the weekly gathering of petition signatures against the European Islamic Center, Munich) is being trampled underfoot. Not a word about the threat — and often the carrying-out — of criminal prosecution against critics of Islam or the EU. Not word about the equating of Islam-criticism with “right extremism” and other extremist views. Europe was not mentioned in any of these speeches, as it certainly should have been. Only written questions were allowed, after the speeches, and they were pre-selected.

At dinner, we representatives of Bürgerbewegung Pax Europa, ACT! for Canada and the International Civil Liberties Alliance promised ourselves that we would change this in the following year. It is critically important that a Michael Stürzenberger, a Tommy Robinson, a Michael Mannheimer, a Lars Hedegaard, a Sabatina James (unfortunately, the list could go on and on) report about the fact that the most important rights that distinguish a democracy are incrementally being lost in Europe. Europe is not (any longer) the continent of freedom described repeatedly, indeed drilled into us by the MSM. This must be addressed at a conference of this importance.

A short summary of the presenters: Marina Nemat — politically persecuted by the Iranian regime and raped repeatedly — spoke of her experiences and the fact that the danger from Iran does not lie primarily in its atomic program, but arises from its oppression of its own people. She pleaded that Iran not be bombed. It would be more productive to give dissidents and victims of political force like her a public platform on CNN and other media, which are already offering one to Ahmadinejad.

Two former prisoners in North Korean concentration camps told of their experiences, and this was difficult for listeners to hear.

Two Cuban dissidents spoke about the situation in Cuba as well as the implications of the briefly allowed freedom to travel. A young woman, in amazingly good English, spoke about the unexplained death of her father, who had had taken part in the Cuban resistance.

The husband of one of the members of the imprisoned Pussy Riot “singers” had the opportunity to explain his view of things. I have never personally been a fan of the Pussy Riot Action, and I could not identify with the husband. In fact, I caught myself agreeing with Vladimir Putin, who was supposedly being unmasked in a TV interview being shown on the screen. The husband’s obvious arrogance was also off-putting.

For us, the most honest and most clearly interesting presenter was Kacem El Ghazzali, a young blogger from Morocco who identified himself as an atheist and had to seek asylum in Switzerland when he expressed his opinion about religious and sexual freedom.

His message was the clearest: we need freedom of expression and the freedom not to have to believe in Allah and the Koran. Because this was not regarded with favor in Morocco and in his family, he received death threats. We will make sure that more will be heard from him. We will keep in touch.

What remains of this conference are new contacts and the absolute necessity of directing attention to Europe. Europe must not be seen as a white spot on the map of human rights violations.

* Service organizations for professional women/women in positions of responsibility.

3 thoughts on “BPE At the Human Rights Conference in Geneva”