Below is her summary of a talk given in Geneva by Marina Nemat, a woman who miraculously survived a stint in the most infamous prison of the Iranian gulag.

An Alumna of Evin Prison
by Elisabeth Sabaditsch-Wolff 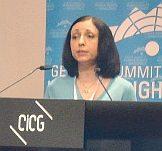 Marina Nemat, an Iranian author who has written two books, spoke passionately in Geneva about the hospitality extended to her as a 16-year-old in Tehran’s notorious Evin Prison.

She recounted that she was repeatedly interrogated, beaten to a pulp, and then forced to marry her torturer, who himself had been a political prisoner during the era of the Shah. Ms. Nemat told the audience about how she was beaten on the soles of her feet with a cable, and made to get up over and over, only to be beaten again.

Ali, her torturer, told her one day that she received a death sentence, but if she married him, she would not be freed, but she would remain alive. She was raped night after night. And she survived.

Ms. Nemat’s message is that justice and revenge are two different concepts. Her “husband” exacted his revenge by torturing her, just as he had been tortured. “No matter what they take away from you — your life, your religion, whatever — they cannot take away YOU. And at the end of the day you have the choice of whether you pick up that cable.”

Sharia law, we were told, will not result in justice when half of the population has half of the rights of the other.

She implored the world not to forget the prisoners of Evin, to speak up, to allow a former Evin prisoner to counter Mr. Ahmadinejad’s words every time he gets his on-air minutes on CNN and elsewhere.

“Your silence is a weapon of mass destruction!”

3 thoughts on “An Alumna of Evin Prison”