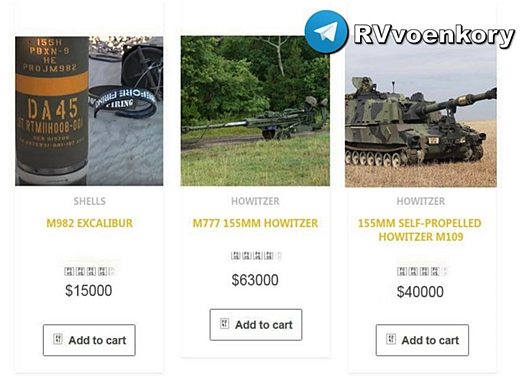 Ever since the West began mass shipments of weaponry to Ukraine, there have been reports that high-tech armaments were immediately being diverted to the black market, with some of the swag ending up in Russian hands. Below are details about the entire corrupt process.

One should admire the business acumen of the Ukrainians. Heavy weapons in combat only mean that the inadequately-trained crew was invited to be the target for Russian clay-pigeon shooting — it would be a death sentence. So the Ukrainians are doing what they’ve been doing for decades: corruption, black market trading. Self-propelled artillery pieces are available there from €40,000.

In most cases, it is unknown who the buyers are. Only in the case of arms deliveries from France did details come to light. The buyer was a Russian armaments company, which then insisted on “fooling” the West and France with social media postings. The advanced French CAESAR guns went to the Uralvagonzavod company for a paltry €118,000 each. Now Russia has the most modern French artillery technology.

Mainstream media write about weapons “being captured” and “being stolen”, but alternative media circles have known about it for weeks and tell a completely different story. But at least France has promised further deliveries. Criminals in Ukraine rejoice — it is the only known shop in the world where stolen goods are delivered voluntarily and do not have to be stolen before resale. Incidentally, a CAESAR system is sold by the manufacturer for US$7.5 million.

The fun, colorful weapons flea market in Ukraine continues cheerfully. Western States are outbidding each other for who can deliver the most in the fastest time. Even if obsolete and decommissioned weapon systems are often supplied, resale is obviously worthwhile for the Ukrainians, who would rather get rich than die in the war. The picture below [see the screen cap at the top of this post] shows the current black market prices on the Darknet.

An M109 artillery tank costs $14.4 million each. In Ukraine you can get it for as little as $40,000. The M777 howitzer retails for around $3 million including parts, maintenance and training. In Ukraine, a piece costs $63,000. Who would have thought that a thoroughly corrupt country would still be thoroughly corrupt today? In fact, Ukraine not only wins the song contest but also the international corruption index. The German daily news reported on June 24, 2022 that there was corruption at every level in Ukraine. It is not known whether the responsible editor still works for the Tagesschau today. Ukraine thus apparently meets all the criteria that are important for an EU accession candidate. Even the EU can still learn from the corruption in Ukraine — who knows, the Austrian ÖVP might be looking forward to appropriate training.

Someone with an IQ below that of a fossilized number-plate could have predicted that this would happen, it doesn’t need a geopolitical “specialist” to figure this one out. It was clear from the start that the weapons the West so happily supplied would eventually be sold to criminals or terrorists via the dark web, especially from a country with a track-record of corruption, from the highest levels all the way into the sewer, like the Ukraine. However, those that “turned up” in Russia were captured? Yeah right. Stupidity must be punished, and it seems that the Russians are showing the West how stupid they really are.

22 thoughts on “We Can Get It For You Wholesale”