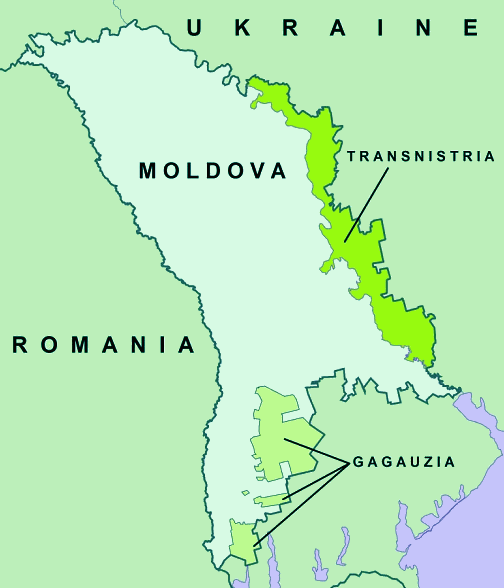 Transnistria (“across the Dniester”) is a region of Moldova located between the Dniester River and the Ukrainian border. It is inhabited mainly by ethnic Russians, and has been quasi-autonomous since the breakup of the Soviet Union.

Moldova proper is populated by ethnic Romanians who speak a dialect of Romanian. Another fragmented ethnic region in Moldova, Gagauzia, is populated by descendants of Turkic people who settled there during the Middle Ages.

Since the war in Ukraine began, Transnistria has been targeted by drones launched from outside its borders. Mysterious explosions have been reported on multiple occasions.

Many thanks to Hellequin GB for translating this article from Anti-Spiegel:

There are topics that don’t appear in Western media. This applies, for example, to all the overly frank statements made by Ukrainian President Zelensky’s most important adviser. This is Alexei Arestovych, whose name you should remember; see here for details.

Arestovych openly said that Ukraine is ready at any time to expand the war to Transnistria. Since Russian peacekeeping troops have been stationed there since 1992, this would be a very unpleasant situation for Russia, because the Russian troops there would be effectively cut off from supplies. Russia would either have to abandon them there or massively change its strategy in Ukraine to come to the aid of the soldiers there.

Western media recently reported on an explosion in Transnistria, but Western media have not heard anything about the fact that there have been constant new explosions and overflights by armed Ukrainian drones since then.

Russian television reported on this, and I translated the report. Before we get to the translation, however, I want to remind you once again what the region is about, because perhaps not all readers will be aware of it.

Moldova is a small country with a short but difficult history. Located between Ukraine and Romania, the country is a former Soviet republic that experienced civil war after the collapse of the Soviet Union. Since then, the country has been divided and consists of Moldova, which is recognized under international law, and the breakaway Republic of Transnistria. The civil war was ended by an agreement between Moldova and Russia, and Russian peacekeepers have been protecting the former front line for almost twenty years now.

Moldova is comparable to Ukraine because it is a multi-ethnic country where the dominant Moldovans, who are often referred to as Romanians, discriminate against the languages of other minorities. For example, although Russian is widely spoken and used primarily in cities and in business, it does not have the status of a national language. Exactly these ethnic problems were the reason for the civil war at the time.

Moldova has written into its constitution that it is a neutral state. However, in late 2020, the pro-Western, US-educated politician Maia Sandu, closely associated with George Soros, narrowly won Moldova’s presidential election. After that she also replaced the government with controversial political maneuvers in 2021 and has been consistently leading the country West since the summer of 2021.

After taking power completely, she openly announced a “cleansing” of the country’s judiciary in the summer of 2021, which was presented positively in the West and as a measure to fight corruption. In truth, it was a political purge, as Sandu wants to cement her country’s westward course and remove its opponents who want to preserve the country’s neutrality. Sandu also spoke of needing support from the USA for the upcoming reforms and shortly thereafter described the USA as an important strategic partner.

As early as January there were indications that the situation in the region was getting worse; you can find details about that here.

Now we come to the translation of the report from Sunday evening’s news review from Russian television on the current situation in Transnistria.

Officially, Transnistria is on the “red” terrorism threat level. As recently as Thursday a drone with explosives launched from Ukraine was neutralized over the territory of the republic. Four explosions occurred near the village of Voronkovo, near the Ukrainian border, on Friday evening. A report from Transnistria.

The site of the explosion is cordoned off. The area may not be entered. Behind the cordon is a Military Unit that has been the target of several terrorist attacks over the past two days. Another provocation by the Ukrainian Secret Services.

Their drones can be seen in the Voronkovo sky every night. The small village in the north of Transnistria is in a border area. It’s about ten kilometers across the fields to the Odessa region. The radio-controlled drone was launched from there, after which explosions occurred near the Military Unit.

There used to be a Soviet airfield here. It was built before World War II, and during World War II a fighter regiment was stationed near Voronkovo. However, there are no more flight operations here and the runway is plowed over. But the Western curators of Ukraine have their own plans here.

The neighbor’s aggressive mood can be clearly seen from the lookout tower. After the official border with Transnistria was closed, Ukrainian border guards have been strengthening their positions on the line of contact. Sandbags are carried to the concrete blocks to set up the shooting ranges.

The Kuchurgan border crossing. No people or cars. It is 200 meters to Ukrainian territory. Behind the barrier is a neutral stripe — the bridge over the Liman. The Ukrainians mined them.

The only railway bridge has already been blown up. It is no longer possible to reach Odessa from Tiraspol by train. Ukraine defends itself with terrorist attacks against neighboring Transnistria.

“Our people have already gone through one war, in 1992. We know what losses are and we will keep the peace in our country to the end,” said President Vadim Krasnoselsky.

After the failed act of sabotage in Mayak — the second within a week, in which a drone equipped with explosives was supposed to switch off the entire radio center — there were calls from Kyiv to unleash a war: “We also have unhealed wounds. And as soon as you need us in peace or in war, we will always come to your aid,” Ukrainian politician Alexei Arestovych said to Moldova.

This is an appeal to official Chisinău, where Maia Sandu receives European politicians every other day. Charles Michel, President of the European Council, extends a helping hand to Moldova, which has not noticed the terrorist attacks in Transnistria: “We plan to significantly increase support to Moldova. We are providing additional equipment for your forces.”

For her decision on her pro-European course, Sandu also expects additional military support from neighboring Romania, where NATO maneuvers have just begun.

Foreign officers are now appearing at the Moldovan-Transnistrian border. Officially to control the flow of Ukrainian refugees. Unofficially, Romanian border guards have long been patrolling the demarcation line on an equal footing with Moldovan border guards.

“The Republic of Moldova has chosen its allies; we must finally understand and hold on to that. Well, they chose this direction themselves, there you go, no problem. But we didn’t choose this direction; Transnistria has another direction; our opinion must be respected,” says Vadim Krasnoselsky.

The Republic of Moldova does not recognize the direction of Transnistria and tightens its blockade. Hundreds of tons of cargo are confiscated at checkpoints. Imports of medicines fell by 70 percent, as did imports of raw materials for the big steel mill.

“The plant did not violate anything; it worked mainly for the European market. Every month the Republic of Moldova receives $10-12 million for services and sale of raw materials,” said Sergei Kornev, general director of Moldova Steelworks.

Without considering the money, Moldova failed to issue an environmental permit, which is a dramatic change in legislation. In the meantime, the European market has lost an important supplier.

The heart of the plant, the huge steel furnace, is shut down. The main hall is unusually dark and quiet. Work is suspended, which has been dragging on for four months.

They were 30 percent behind on production, using only local scrap. After long negotiations, they returned to normal work. However, the Republic of Moldova only issued the permit for one month.

The export, on which Transnistria tries to live, also depends on the relations with Chisinău. The apple orchards are blooming under the hot May sun. This is the largest plantation in the republic: nine different varieties and almost 4,000 tons of harvest. Everything for the Russian market, to which it has to be transported. And nobody knows how. The logistics are now almost five times more expensive; the way is longer — through the north of the Republic of Moldova. But there is hardly any passage for trucks with goods destined for Russia.

This is the former granary of the Soviet Union. All these fields were state farms. Even now, Transnistria is only staying afloat thanks to its farmers. All of the country’s wealth is in the local market. You can also find all the latest news here. “Everyone is worried, but we are persevering. We hope that Russia will recognize us and everything will be fine. Our children are there, so we are only with Russia,” say the locals.

Here they have their own currency, passports and license plates. The three official languages are Moldovan, Russian and Ukrainian. But the Russian flag is just as common as the Transnistrian one. And even if there is no common border, there is a common past, the memory of which is carefully preserved here.

Is this the making of a European continent-wide WAR we’re seeing here? It surely looks like that to me, even though I’m not a geopolitical engineer who tinkers with retarded ideologies or ambitions… and to hell with the possible outcome. It’s the peasants after all that have to pay the ultimate price. So, let’s party.

16 thoughts on “The Droning of Transnistria”