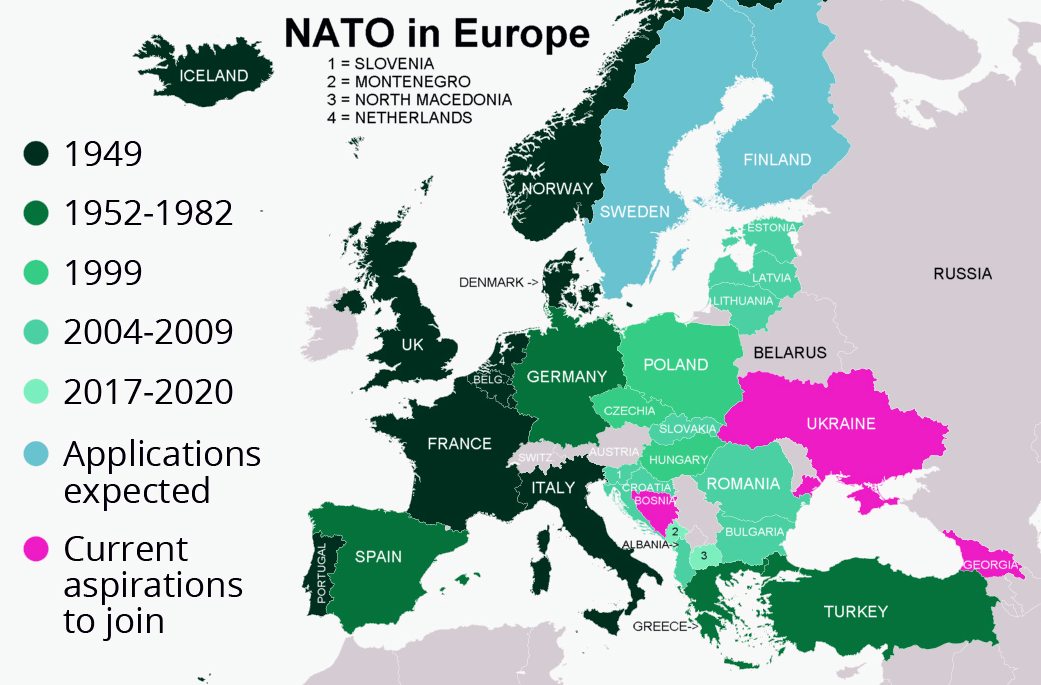 Sweden is poised to become the 31st member state of the North Atlantic Treaty Organization. It will be the third Muslim country in NATO (after Turkey and Albania).

Many thanks to Gary Fouse for translating this article from Nya Dagbladet:

Reports: Sweden will apply to NATO on Monday

Despite assurances of extensive discussions about Swedish membership in NATO, it is becoming increasingly clear that a decision has already been made that Sweden will join the US-dominated alliance. According to information, the government will send in an official application on Monday.

Sweden’s government will hold a meeting on Monday, where the formal decision on entry into NATO will be made. According to sources to the Bonnier* newspaper Expressen, the decision has already been made, and immediately after this meeting, an official application will be sent in.

It is considered especially important that Sweden and Finland apply together, and the Finnish political leadership declared Thursday that “without delay” they will apply to join NATO.

Officially, several meetings and debates will first be held where the question will be discussed, among others, by the Social Democrats’ members in Parliament, and the security political analysis group, which will prepare a report at a press conference. On Sunday, the Social Democrats’ party leadership will make a formal decision on membership.

In practice, however, it is already clear if one can believe the sources, and on Monday Prime Minister Magdalena Andersson will call for an additional governmental meeting where the decision will be hammered through, and immediately after this, an application will be submitted to NATO.

The Social Democrats’ official line is that NATO membership is still “an open question”. As Nya Dagbladet reported earlier, the main reason for this is to give the image of a living internal democracy within the party. Members say at the same time that party leadership has for some time decided on entry into NATO — even though a large part of its members are opposed.

“All who were physically present at the meeting yesterday were positively inclined towards NATO. This was more of an information meeting on the Social Democrats’ about-face on this important question. On paper, it’s good to say you are having a dialogue, but you must also actually have it,” says the Social Democrat Kent Vilhelmsson, who participated in the virtual meeting where the question was reportedly firmly established and discussed.

“None of the 1,800 participants was allowed to speak during the barely one-hour meeting, which the party leadership tightly controlled,” he further stated on Facebook.

The only political parties expected to remain opposed to Swedish NATO membership are the Environmental Party and the Left Party.

Previously, among others, the Left Party has demanded that a referendum should be held on the question and that the Swedish people should be involved in a decision of this magnitude. This type of suggestion, however, has been repeatedly rejected by the larger parties, which, among other things, claim that it is “dangerous” to let the people decide on this type of question.

Opponents of NATO entry point out that the military alliance, in practice, is dominated by the USA, which has a very long history of driving imperialistic wars of aggression against countries and regimes, which are primarily about winning geopolitical advantages and control over natural resources.

Criticism is also directed in the context in which a Swedish soldier with NATO membership can be compelled to take part in war and conflicts with a very distant connection to Sweden— for example, a potential war between NATO member Turkey and Syria. This is due to the fact that all member nations commit themselves in various ways to assist a member country that is attacked.

2 thoughts on “A New NATO For a New Cold War”