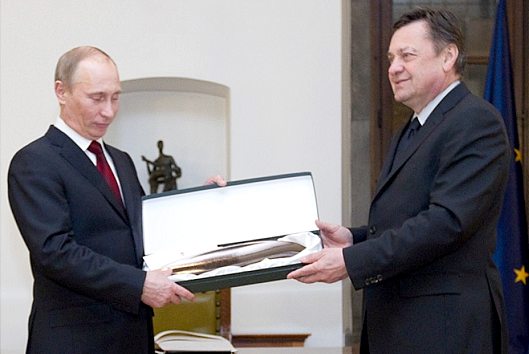 Plenty of attention has been focused on tomorrow’s showdown between Emmanuel Macron and Marine Le Pen in the French presidential election. However, there’s another too-close-to-call contest in Europe tomorrow: the parliamentary elections in Slovenia.

According to the Slovenian weekly Demokracija, the Russian government has been attempting to interfere with the Slovenian vote by its support for the new SvoboDA party:

Russian Interference In The Slovenian Elections

Possible Russian meddling in the Slovenian elections was detected when an NGO, believed to be a special-purpose vehicle for avoiding campaign financing rules for the SvoboDA party, offered free taxi rides to voters in their stronghold Ljubljana.

The SvoboDA was registered a few weeks before the election, and its financing is not transparent. The party president Mr Robert Golob is a former director of Slovenian energy company GEN-I with close ties to Russian Gazprom. Mr Golob is also former vice president of the political party of Mr Zoran Jankovic, who received the Order of Friendship, considered one of the most prestigious Russian awards, from Mr Vladimir Putin.

Mr Dejan Jefim, a businessman with close ties to Serbia, Russia, and Mr Jankovic, finances the taxi rides. Mr Jefim has been a regional manager for the Russian multinational Yandex, but in his own words, he does not work for Yandex anymore. This claim can’t be independently verified. Mr Jefim is also the owner of an IT company that holds 80% market share in the IT equipment for taxi services in Slovenia. Interestingly enough, at the same time, Mr Jefim is also the president of the union of Slovenian taxi drivers.

The vice president of SvoboDA party, Mrs Marta Kos, is a vocal opponent of sending arms to Ukraine and promotes dialogue with Moscow instead.

For more background on tomorrow’s election in Slovenia, see this article from ANSA (hat tip Insubria):

(ANSA) — BELGRADE, APR 21 — Slovenia will go to the polls on Sunday for the parliamentary elections, with a neck-and-neck run for the victory between the Slovenian Democratic Party (SDS) led by conservative Prime Minister Janez Jansa, and the new liberal and progressive Freedom Movement (Gibanije Svoboda) of former public top manager Robert Golob. According to the polls, the two political forces have a gap of about one percentage point between each other. The Social Democrats (SD) could get around 8% of votes, followed by the Left (Levica), while Nova Slovenija (NSi), is firmly given around the 7%. The movements of two former heads of government, the Party of Alenka Bratušek (SAB) and the Lista Marjan Šarec (LMŠ), risk not breaking through the barrier threshold for entering the Parliament, as well as a number of other formations, such as the Pensioners’ Party (DeSUS).

One thought on “Russian Meddling in Slovenia”