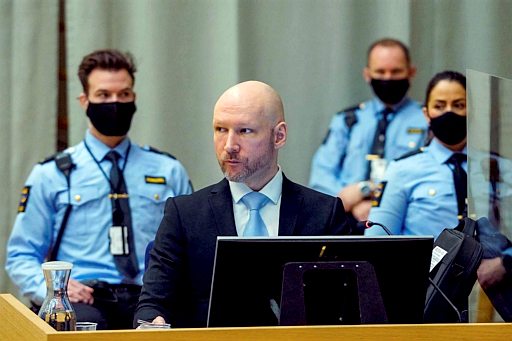 2022 marks ten years since Anders Behring Breivik was sentenced to 21 years in prison. Last month he appeared in court for a hearing in which he requested parole (referred to as a “conditional release”). Mr. Behring enlivened the proceedings by bringing Nazi materials with him to court, sieg-heiling the judge, and engaging in other Nazi-related behavior.

Today the court turned down Mr. Breivik’s request for parole. Many thanks to LN for translating this article from the Swedish public broadcaster SVT:

Breivik is refused a conditional release

The district court in Telemark states that Breivik has not changed, but is driven by the same perceptions as when he murdered 77 people in 2011 in a terrorist attack on Utøya and in Oslo.

His attorney tells NRK that Breivik will appeal the decision.

Dissociates himself from violence

The proceedings have been going on for three days, and Breivik has brought posters and papers with Nazi content every day. He made several Nazi gestures, including to the judge.

At the same time, Breivik claimed that he now distances himself from violence.

“I ask for understanding that one can be a Nazi without being militant. Today, I strongly dissociate myself from violence and terror as well as the goals of the manifesto. I hereby give you my word of honor that this is behind me forever,” said Breivik.

The court does not consider Breivik to be credible.

“The accused seemed to lack empathy and compassion for the victims of his terror. He verbally expressed grief over the victims. But at the same time, he defended and possibly legitimized his actions by saying that most of those affected on Utøya were not children, but people with “leadership positions”. This despite the fact that he should know that among the dead were children as young as 14 years old,” it says in the decision.

According to the forensic psychiatrist Randi Rosenqvist, Breivik is still a dangerous man.

“Statistically speaking, the possibility of new violence is substantial during probation,” says Rosenqvist.

In 2012 Anders Behring Breivik was sentenced to 21 years in prison, a sentence that can be extended if he continues to be considered a threat to society. After having served ten years, he gained the right to a court hearing for conditional release. He can request a new consideration in a year.

3 thoughts on “No Parole for the Butcher of Utøya”