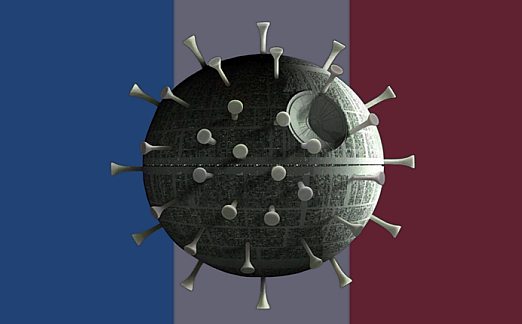 As most of you know by now, the French chapter of the Powers That Be is alarmed about the threat Eric Zemmour poses in next year’s presidential race. The guy is just too popular, and the Antifas haven’t yet managed to kill him.

An establishment newspaper is now discussing how the election might be postponed. Just a coincidence, I’m sure.

Many thanks to MissPiggy for translating this article from Le Journal du Dimanche:

Covid-19: Can the presidential election be postponed due to the epidemic?

The constitution does not allow for the postponement of the presidential election due to the epidemic. But here is how the executive branch could postpone the election if necessary.

Can the presidential election be postponed because of the epidemic?

The constitution does not provide for this. Article 8 states that the election must be held before the end of the current president’s term, which is May 14, 2022. France has already held several elections during the Covid-19 epidemic: municipal, departmental and regional elections. Each time with sanitary measures to avoid the spread. The epidemic does not seem to be able to hinder voting.

It will be necessary to modify the Constitution

But if the population is confined on April 10 and 24, participation could fall. The executive could then be tempted to find a way to postpone the vote. There is nothing to prevent the Constitution from being amended on March 15, for example, explains specialist Didier Maus, “This can be done in eight to ten days, with a constitutional law that modifies the duration of the president’s mandate. However, this would displease the purists. But for this to work, the Assembly and the Senate must agree.”

And if a candidate is ill? There, the Constitution can help. If one of them is “prevented” (in intensive care, for example), the Constitutional Council can postpone the vote beyond the limits provided.

Hmm. The Boy President has been vaxed, so he stands a good chance of catching COVID. Hurry! Let’s intubate him! That should give us enough time…