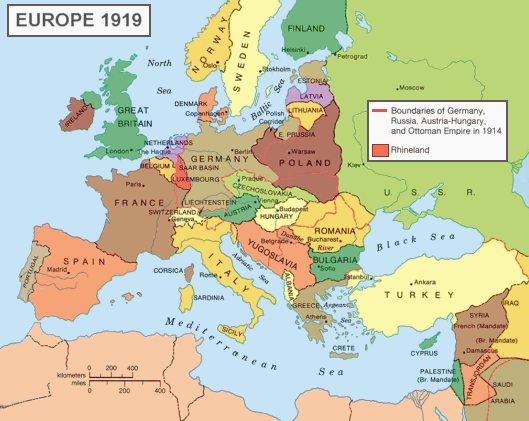 In the two years since Dymphna died I have dedicated myself to putting my affairs in order, so that the future Baron won’t have too hard a time when I shuffle off this mortal coil and go to claim my 72 virgins. One of the most difficult and time-consuming tasks has been to clean out, cull, and reorganize the material in the filing cabinets here at Schloss Bodissey. I have to pull out all the papers and scrutinize them before deciding whether to keep them or not. In the process I have come across a number of delightful surprises, plus a few mysteries.

An example of the latter is a hand-written chart (to be discussed in detail below). It’s in pencil, in my handwriting (and very small — you can tell my eyes were still working), written on the back of a computer printout that dates it to 1990. It’s basically a compendium of territorial changes in Europe between 1916 and 1945. 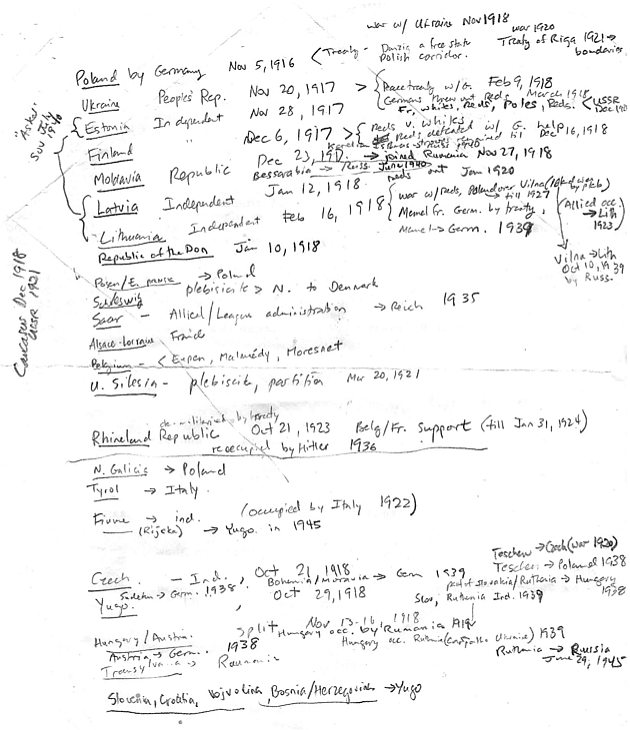 The big mystery is: why the heck did I put the thing together? It was written fourteen years before we started blogging. The future Baron was too small at that point for the document to have been one my lesson plans for him. The material in it closely tracks what I had to absorb to take my A-levels (and special papers) in European history. But it was written twenty years after I took my exams, so I couldn’t possibly have been regurgitating it from memory. I can tell I consulted the Harvard Encyclopedia of World History (a 1948 edition inherited from my father that is now held together by duct tape. It is one of the most treasured resources in my reference library, second only to the Oxford Dictionary of English Etymology). Alas, I can no longer read it without a magnifying glass, so I won’t be checking any of the dates and facts on my chart to make sure they’re right.

For weeks I puzzled over the document, trying to figure out why I compiled it. My best guess is that Dymphna had been reading something — possibly The Guns of August by Barbara Tuchman — and wanted to know about the territorial adjustments made in the map of Europe by the Treaty of Versailles and others that followed in the wake of the Great War. She knew I was well-versed in modern European history, so she must have asked me if I would put something together that would summarize it for her. I would have been delighted by her request, because I love to do that sort of thing — or used to, when my eyes still functioned normally.

The chart is a useful resource, so I took the trouble to transcribe it as well as I could. Doing so brought back memories of all that old A-level material. Vojvodina! I hadn’t thought about that name in a while. And some of the other names — Serbia, Slovenia, Croatia, Bosnia-Herzegovina, Moldavia, etc. — are well-known now, because they’re sovereign states, but they weren’t in 1990; they were still socialist republics within one or the other of the communist superstates.

I can still remember a few more names that didn’t make it to the chart — the Sanjak of Novi Bazar, for example, or Eastern Rumelia.

The map of Europe was drastically reorganized after 1917 (after the Bolshevik Revolution, that is) and then even more so after 1918 in a series of treaties that divvied up the territory of the collapsed empires. Adolf Hitler did his part to rearrange the map even further, and then major revisions took place after the end of World War Two until 1946 or so. After that everything was frozen in place by the Cold War for the next 45 years. Then suddenly in the 1990s you started to see names in the newspaper that hadn’t been there since the 1930s — Montenegro, for instance, and Estonia. And things are still in flux now — who knows what the map of Europe will look like after the EU finally collapses?

Here’s my transcription of the document. I tried to put it in date order as far as possible. I expanded abbreviations when I was sure what they meant; otherwise I left them as-is:

The title of this post is a reference to “At the Cenotaph”, a between-the-wars poem written by Siegfried Sassoon. It reportedly refers to a visit to France in 1938 by German Foreign Minister Joachim von Ribbentrop to lay a wreath at the tomb of the unknown soldier. Other sources say it refers to a visit by Ribbentrop to London, where he laid a wreath at the Cenotaph. The latter version makes more sense, given that the poem specifically refers to the London monument.

I saw the Prince of Darkness, with his Staff,
Standing bare-headed by the Cenotaph:
Unostentatious and respectful, there
He stood, and offered up the following prayer.
‘Make them forget, O Lord, what this Memorial
Means; their discredited ideas revive;
Breed new belief that War is purgatorial
Proof of the pride and power of being alive;
Men’s biologic urge to readjust
The Map of Europe, Lord of Hosts, increase;
Lift up their hearts in large destructive lust;
And crown their heads with blind vindictive Peace.’
The Prince of Darkness to the Cenotaph
Bowed. As he walked away I heard him laugh.