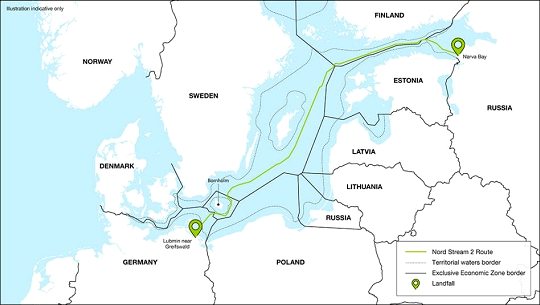 Back in 2006 I posted several times about the new Russian natural gas pipeline that was planned to run under the Baltic Sea from the Russian coast of the Gulf of Finland to northern Germany. Among the purposes of the proposed pipeline was that it would bypass Gazprom’s Central European customers and connect directly with those in Western Europe. Once the new pipeline was in place, the Kremlin could express displeasure with Central European countries that resisted its regional hegemony by cutting off their gas supply, without hurting Germany, which is generally compliant when it comes to Russian interests.

At the time the Central European states that were irritating Russia the most were Poland and Hungary. I would guess that these days Ukraine is more in the forefront of Russia’s concerns in the region.

The pipeline, now known as Nord Stream 2, is nearing completion. When it is fully operational, Russia will be able to cut off the gas supply to Kiev whenever it likes. In the dead of winter, for example — a powerful non-military means of coercion.

Central European member states of NATO have asked the United States to sanction the company in charge of the pipeline. The Biden administration has said that the building of the pipeline constitutes “sanctionable conduct”, so it seemed extremely likely the sanctions would become official.

Until yesterday afternoon, that is, when sources reported that the State Department had decided to waive the sanctions on Nord Stream 2.

The decision seems mysterious — Russia is the great bogeyman, and the EU wanted the sanctions. Why would the US decide to waive them?

It took a while for the information to sink in, but a few hours later a light bulb came on over my head, and I understood what is really going on.

First, here’s the news of the decision, as reported by The Hill:

The U.S. State Department is set to waive sanctions that would affect the construction of a Russian company’s pipeline into Germany, Axios reported Tuesday, citing two sources briefed on the matter.

In its mandatory 90-day report to Congress, the Biden administration will concede that both the corporate entity behind the pipeline, Nord Stream 2 AG, and CEO Matthias Warnig, are engaging in sanctionable conduct. However, the department will suspend application of those sanctions, but apply sanctions to Russian ships involved in the construction.

Fully halting the 95 percent complete project would likely require sanctioning German entities as well, the sources told Axios, and the White House has decided against applying such pressure to the U.S.-German relationship.

The completion of the pipeline would allow fuel from Russia to bypass Ukraine to reach Europe, undermining the nation’s connection to western Europe. Secretary of State Antony Blinken Antony Blinken previously said in his confirmation hearing earlier this year that “I am determined to do whatever we can to prevent [the pipeline’s] completion.”

Sources told Axios the administration would reserve the right to cancel any sanctions waivers, and that knowledge of that would give the U.S. leverage over Russia.

Radosław Sikorski, the interparliamentary delegation chair for the European Union, called for the U.S. to impose sanctions on the entire pipeline in April. After a meeting with a group of lawmakers including House Foreign Affairs Committee Chair Gregory Meeks Gregory Weldon Meeks (D-Calif.), Sikorski told The Hill he “made the point that if the U.S. imposes sanctions they should be effective.”

A spokesperson for the State Department told The Hill that the administration “has been clear that the Nord Stream 2 pipeline is a Russian geopolitical project that threatens European energy security and that of Ukraine and eastern flank NATO allies and partners.”

Needless to say, congressional Republicans are hoppin’ mad about the Biden regime’s decision to go easy on the Russians and encourage them in their bullying behavior.

But there’s a larger story here, one that everybody seems to be overlooking.

Cast your mind back ten days or so ago to news about another pipeline, the Colonial Pipeline Company’s gas pipeline on the East Coast of the United States. Colonial was hit with a ransomware cyberattack on its control systems, and was forced to shut down operations almost a week. The supply of gasoline to the East Coast dried up. As panic buying kicked in among the general public, most gas stations ran out of gasoline, and long gas lines formed up at the few remaining businesses that were still pumping gas.

For citizens of a certain age, gas lines bring up memories of Jimmy Carter and the “malaise” of 1979. Which is not something that the Democrats would see as politically advantageous.

Colonial hastily paid a $5 million ransom to get their systems back. By the beginning of this week the gas had started pumping again, although the price seems to be stuck twenty cents higher than it was a couple of weeks ago.

The hackers who brought down Colonial were said to be based in Eastern Europe. At the time I took that to mean Ukraine or Belarus, and I thought, “Hmm… The Russians must have known about this. It’s on their home turf, so even if they didn’t contract for it, they must surely have been aware of it in advance.” But I didn’t see what advantage Russia would gain from it, except for a brief, temporary spike in the price of oil.

Yesterday afternoon, however, everything became abundantly clear. I can imagine a brief, cordial note from the Russian ambassador delivered to the State Department in Washington D.C.:

I would like to extend my sympathy to the United States for the mishap the Colonial Pipeline Company suffered in the operation of its pipeline. Energy security is crucial for everyone, especially where pipelines are concerned. It is my fervent wish that no other American pipeline might suffer a similar misfortune.

And speaking of pipelines: Despite these unfortunate circumstances, I would like to remind the Biden administration that sanctions against the Nord Stream 2 pipeline are in no one’s interest, neither Russia’s, nor Europe’s, nor the United States’. President Putin has communicated to me his earnest hope that President Biden will waive those sanctions. Such a gracious move would go a long way towards re-establishing amicable relations between our two countries.

Well, son of a bitch, the sanctions got waived!

I’m sure the Russians are grateful for Mr. Biden’s kindness.

21 thoughts on “It’s in the Pipeline”