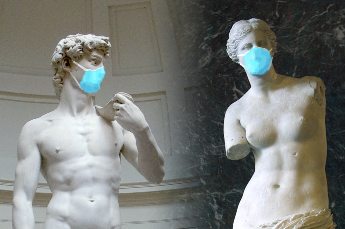 I ventured out into Mask World today, visiting three places, the bank and two grocery stores.

I have to confess that I dread going into most establishments these days, due to the masks and the taped lines and the little circles on the floor and the encouraging signs that tell me “Masks keep us SAFE” and similar slogans. But the bank was refreshing. I encountered two people, the teller and the assistant manager — the former was masked and the latter wasn’t.

I know the assistant manager fairly well, so I pretended to chide her: “Where’s your mask?” She replied, “Oh, I’m so over that.” And she is — this is the second or third time I’ve seen her without one. She seems to be a fellow coronadissident.

The first grocery store was a small local market where I can get pastured eggs and bargains on good fresh meat. I was the only person in the store without a mask, although I did see one fellow who had let his slip down under his nose. So the standards there were somewhat slack.

Next was the Food Lion, the plebeian supermarket chain. I saw three people in there with no masks, one a young teenage girl; the other two were elderly, a man and a woman. Nobody was social-distancing, of course.

My intuition tells me that most people are just doing their duty when they wear a mask. Out here in the boonies, nearly everyone pulls the mask off as soon as they get out of the store. Very few wear them all the way to their cars, unlike Charlottesville, where some people even wear them in their cars. When they’re by themselves.

There were two unmasked women just outside the door of the Food Lion, manning a table (if women can do that) of literature and merchandise for a Christian group that ministers to substance abusers. I gave them a donation just because they weren’t wearing masks.

As I pulled out of the parking lot, I noticed that one of the Christian women was helping Food Lion by going out to the shopping cart pens and bringing the empty carts back into the store. And putting her filthy COVID-ridden hands all over the handles, but nobody seemed to mind.

All in all, it was a pretty good excursion. I gave it a corona-oppression score of 35%, which is lower than usual.

There’s no punch line to this post. It’s just what I observed during today’s outing in the midst of the Great Pandemic.

Note: The title of this post is a riff on the four-volume series The Masks of God by the comparative mythologist Joseph Campbell.

5 thoughts on “The Masks of Götterdämmerung”