I couldn’t bear the thought of watching last night’s debate between President Donald Trump and former Vice President Joe Biden, so I didn’t. Fortunately, Seneca III undertook that unenviable task from the other side of the Atlantic; his observations are below. 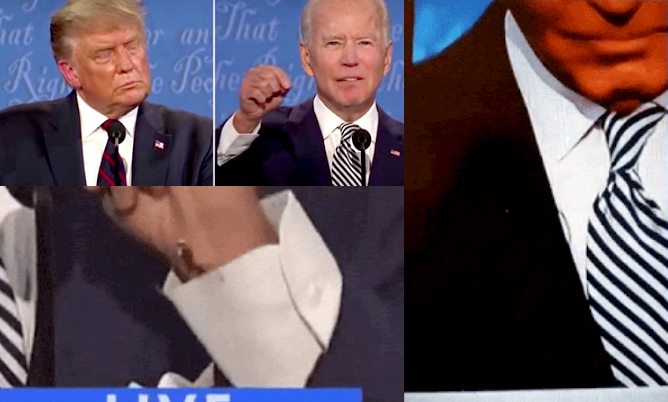 Debates, Drugs, Electrovibrators and Standing on the Edge of Sanity

The Presidential Debate on the evening of September 29, 2020

I am minded of the fact that technology has advanced significantly since the Obama-Clinton era. Look now at the two, strange, purportedly ‘LIVE’ clips in the post at NC Renegade (and running simultaneously in many other places as well).

The doctoring of photos and videos has become a fine art, and I am not technical adept enough to come to a conclusion as to the veracity of these two clips either way, but they do seem to be at cross-purposes location-wise; one shows a thin wire on or passing the right upper chest and the other a thicker terminated wire protruding from the left cuff. How or if they may be related I have no way of knowing. However, if one or both of these clips are undoctored, then the next questions must be: what is their purpose, and how do they function?

If we take that as a given, then we must focus on what is before our eyes. In my case I am particularly interested in the small globular terminal that momentarily protruded from Biden’s left cuff, as there is nothing of significance that I can draw from a short glimpse of a thin loop of wire being tucked under his lapel.

Please draw your own conclusions from the above, dear reader, but do bear in mind that Biden has mostly been sequestered out of sight since his nomination, and indoctrinated control is slow to impose even under a regime of sustained modern electro-medical treatment.

Alternatively, of course, I would be neither surprised nor displeased should you decide that I am the one in dire need of sustained modern electro-medical treatment — it is the most obvious conclusion.

— Seneca III, watching with morbid fascination from Middle England on this 30th day of September in this the year of our Lord 2020.

9 thoughts on “Debates, Drugs, Electrovibrators and Standing on the Edge of Sanity”