I was going through a box of very old stuff today up here in the Eyrie at Schloss Bodissey, and I found a crumpled political cartoon from the autumn of 1968. I’ve restored it as best I can; it’s a real blast from the past: 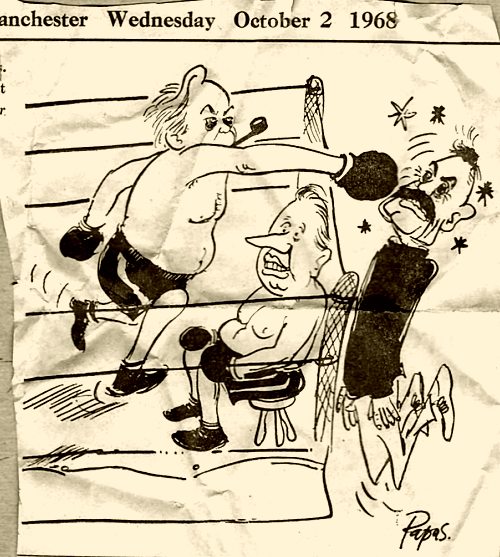 It was published in The Manchester Guardian, as it was known then. Now it’s just The Guardian, more popularly known as The Grauniad.

The guy landing the punch is Labour Prime Minister Harold Wilson. The man receiving the knockout blow is Enoch Powell of the Conservative Party. The previous April Mr. Powell had delivered his famous “Rivers of Blood” speech about immigration. At the time the cartoon was published, he was in the process of being shunned and shamed for that speech by everybody — Labour, Conservative, and Liberals alike. The latter party held about two seats in Parliament, if I remember rightly. I don’t know if the cartoon had anything to do with Mr. Powell’s speech, but presumably he had just been lambasted by the prime minister, who had chosen to attack him instead of Edward “Ted” Heath, the leader of the Conservative opposition, who is depicted here sitting gormlessly on his stool while ’Arold decks Enoch.

Ted Heath was popularly known as “Grocer Heath”, due to his supposed bourgeois family background, if I remember rightly. The Conservatives won the general election of June 1970, and Mr. Heath became prime minister a few days after I took my A-levels, just before my family moved back to the USA.

The artist who drew the cartoon was Papas, who was my favorite cartoonist at the time. I entered some sort of caption contest that he and the Guardian held that year. I don’t remember exactly what it was, but I found a note of acknowledgement from him in the same dusty box.

There’s no punch line to this post. It’s just a snapshot from a brief political moment in the distant past, almost fifty-two years ago. Tempus fugit.