A municipal court in Germany has ordered that a woman be imprisoned for failing to pay her radio license fee.

Many thanks to Oz-Rita for translating this article from the German-language service of RT: 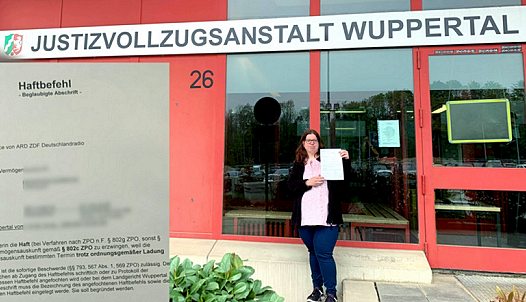 Although the ARD itself considers the use of force in connection with broadcasting fees to be inappropriate, yet another woman landed in prison in North Rhine-Westphalia on Thursday. Sylvia Schulte and her husband do not want to pay any flat-rate radio fees.

It is not the first time that a citizen in Germany has ended up behind bars for small sums he refuses to pay for an unused service. And this despite the fact that the ARD itself considers the compulsory nature in connection with the radio report to be inappropriate.

Sylvia Schulte from Wuppertal was first taken to the Wuppertal prison. However, as this is a males-only prison, she was then taken to Cologne-Ossendorf, which her husband learned about only later, as he told RT Deutsch by telephone on request.

The offence committed by the 41-year-old housewife: For about four years Schulte has refused to pay the fees to the contribution service, which collects the radio fee for ARD, ZDF and Deutschlandradio. According to the freshly signed arrest warrant, the sum amounted to just €277.62. 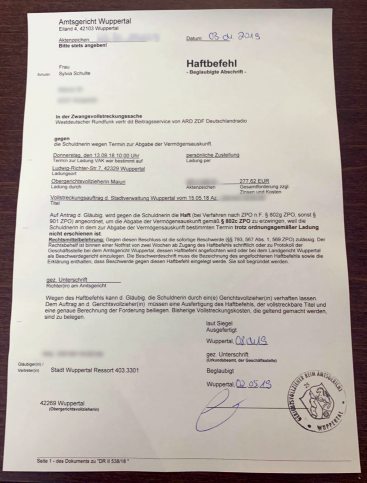 The picture above is the copy of the Haftbefehl, which translates to: “Warrant of Arrest”.

When speaking to RT Deutsch, as a reason for the refusal, her husband gives above all the flat-rate form of the contribution. In his opinion, an appropriate form for the fees would be, for example, a model similar to that of pay stations, for which the viewer pays according to use. However, he points to the low quality of the offer in his opinion and believes that the public broadcasters would then hardly generate any revenue.

Sylvia Schulte had not received any reminder notices; there was only a notice of determination. The city of Wuppertal was to take over the case, but the deadline had already expired when an employee visited. The city’s high court bailiff then intervened and eventually signed the arrest warrant issued in April.

The Schultes are not surprised. For this was not the first case of imprisonment for refusing to pay radio licence fees; they had experienced a treatment similar to that of Sieglinde Baumert. In 2016 the woman from Chemnitz had to serve 61 days in prison because she had not paid any contributions.

After the case led to a lot of public criticism, Karola Wille, then president of ARD, said that compulsory imprisonment was disproportionate. However, this decision is not made by a broadcaster, but by the relevant authorities of the respective state. According to a press spokesman of the Ministry of Justice, a prison stay costs around €130 per day.

For the Schultes one thing now remains: to raise the money as quickly as possible from somewhere, preferably by Thursday. Only then can they deal with the numerous details, such as procedural errors in the entry in the debtors’ register.

19 thoughts on “Jailed For Not Paying Her Radio Fees”