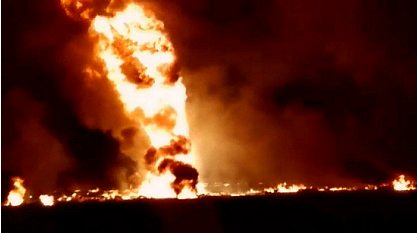 Last Friday a gasoline pipeline in central Mexico exploded, creating a huge fireball. The official death toll keeps rising; as of this writing it is listed as 91. Dozens more people were injured.

The blast was caused by the illegal tapping of the pipeline by fuel thieves, who are known in Mexico as huachicoleros. The practice is a common one, and this is not the first such explosion, simply the deadliest.

As I read the earliest reports about the explosion, a question occurred to me: We have gasoline pipelines in the USA — why don’t things like this happen here? I’m certain there are plenty of unscrupulous down-on-their luck rural entrepreneurs who would consider pipeline-tapping as a career, but they don’t seem to take it up (or not in enough numbers to draw media attention, anyway).

Before examining this larger question, let’s consider some of the details about Friday’s explosion and the practice of pipeline theft in Mexico.

I’ve been reading a lot of articles since the story broke, but didn’t hang on to most of the URLs, so much of what I write here will be unsourced. However, this article from MSN is information-rich, and will serve as a good start for those who want to look into the incident. For further details, do an Internet search on “Tlahuelilpan pipeline explosion” — that will turn up plenty of stories.

The petroleum industry in Mexico is state-run, and the company that manages the pipelines is called PEMEX. The gasoline pipeline along which the explosion occurred runs from Tuxpan on the Gulf coast to Mexico City, making a hard left at Tlahuelilpan in Hidalgo State before continuing to the capital.

The pipeline had been tapped previously more than once at the location in Tlahuelilpan. Whenever that kind of thing happens, PEMEX rigs a patch over the breach and continues pumping. Such patches are easier to tap than an unmarred pipe, so the same spots tend to be used over and over again.

The normal practice is to make a fairly small hole so that the flow of gasoline is not excessive and can be readily utilized. However, on the afternoon before the explosion, one of the fuel thieves became impatient and jammed a piece of rebar into the hole to enlarge it, causing a veritable gusher to spout up twenty feet into the air. In videos of the festive occasion the gasoline plume looks like Old Faithful.

Hundreds of people swarmed the site, carrying large plastic containers to collect the gasoline from the ditch around the pipe. It was not the most intelligent thing to do — the air in the immediate vicinity of the geyser was a dense mass of gasoline vapor, awaiting only a tiny spark to trigger a conflagration.

Which is exactly what happened later that evening. Some reports theorize that the synthetic fabric of the clothes worn by the poor people tapping the pipe generated enough static electricity to create the necessary spark. In any case, without any warning a tremendous fireball exploded over and among the crowd.

The moment of the explosion was captured by someone who had been using an infrared-sensitive video camera to record the night’s festivities. Then, in full living color, you can watch the huge plume of smoke and orange flames rise into the night sky while subsidiary fires spread rapidly at ground level. There appear to be little fireballs rushing away from the center of the blast, but when you look closely, you’ll find that they’re people running away from the explosion. Their clothes, arms, legs, and torsos are engulfed in flame. You can also see people try to extinguish some of the human torches that have collapsed onto the ground. (No, I’m not going to embed the video here; it’s too graphic. But you can find it easily with a YouTube search. And those videos are just the ones that YouTube didn’t pull down — imagine what the others must be like.)

The gasoline vapor was so thick before the explosion that some people passed out, overcome by the fumes. One report says a nearby soldier pulled an unconscious man out of the gasoline-filled ditch and dragged him to safety. Some of the survivors reported that they realized the danger of explosion and hurried out of the area before it was too late.

Such was the Tlahuelilpan pipeline explosion on January 18, 2019. Photos from the following morning show the scorched pipeline and nearby field, with neatly-arranged rows of bodies covered by white sheets.

Illegal pipeline-tapping in Mexico has become a growth industry over the past decade. PEMEX’s pipes are laid shallowly, so that digging down two or three feet will expose the pipe. Local entrepreneurs make the tap, with the support of nearby residents who participate in the collection and sale of illicit gasoline.

The graph below uses data from a useful paper (PDF) published by the Baker Institute for Public Policy at Rice University in 2017. I found the total number of taps for 2017, but the statistics for 2018 are only available through October. In the latter case I extrapolated the total for 12 months and then appended the numbers for both years to the data set to produce this graphic:

That’s clearly an exponential curve. It’s also clear that the theft can’t continue to accelerate at the same rate, because in a few years the gasoline would all be tapped into the thieves’ containers before it could reach the other end of the pipeline.

The recently-inaugurated Mexican president, Andrés Manuel López Obrador, made stopping pipeline thefts a key policy of his new administration. Since he took office last year he has increased military patrols in an attempt to crack down on the illegal taps. He has also been quoted as saying that the fuel-tapping is an “inside job” — that is, corrupt officials within PEMEX are allowing the theft, and presumably taking a cut of the proceeds. The action is so lucrative that even the drug cartels have reportedly gotten into the trade. At this point there is, on average, less than a mile between illegal taps.

The traffic in illicit fuel has become a thriving industry in rural Mexico. According to the Baker Institute’s paper:

In Quecholac, the army clashed with smugglers on May 3, 2017, in an effort to stop fuel theft. However — and as a testament to the difficulties the government is having in curtailing the problem — it was reported that armed gangs and their supporters in the various communities attacked the military, leading to a confrontation where 10 people died (four soldiers and six civilians). The clash shows that huachicoleros, as the fuel thieves are locally known, are in a position to challenge the government and make the liberalization of the gasoline market more difficult.

The rate of theft has increased to the point that there are occasional shortages of gasoline at the locations where it arrives legally, such as fuel depots and gas stations. Part of Mr. Obrador’s anti-theft strategy is to shut down a section of pipeline after a breach so that the problem point can be completely sealed and restored before restarting the flow. Unfortunately, this has exacerbated local shortages, so that even more tapping operations are undertaken, and customers hoard the illicit gasoline against future shortages. It seems to be a vicious circle.

Whether or not the new president is successful in his fight against fuel theft, the problems behind the theft — and the system that generated it — have not yet been addressed. It’s hard to say how the situation will resolve itself, but one thing is clear: things cannot continue for much longer in this fashion.

Back to my original question: Why doesn’t the same thing happen here in the USA?

One obvious factor is the absence of the rule of law in Mexico. Yes, the rule of law is deteriorating here, too, but we have a long way to go to catch up with Mexico. The organized infrastructure required to illegally tap the pipelines and distribute the gasoline would be much harder to establish here. And there is less in the way of official corruption to facilitate the process.

Another factor — possibly the most important one — is that pipelines are privately owned and run in the United States. An explosion such as the one in Tlahuelilpan would create a legal and financial liability of such magnitude that it would probably bankrupt the pipeline company and send its officers and managers to prison. The managers of such a company (and its shareholders) have an enormous incentive to establish preventive measures making certain that illegal breaches in the pipeline are all but impossible to create.

A state-owned corporation is not really liable for anything, not in the normal legal sense. Yes, when disaster strikes, heads will roll, but only the heads of officially chosen scapegoats. Blame for the tragedy is a political process that seeks out the weakest links in the political chain. The most powerful and well-connected people in the system never have to worry about taking a hit.

In a nutshell: We are able to avoid a Tlahuelilpan-level disaster because the rule of law here is stronger, and major energy infrastructure is privately-owned.

There may be other factors that I missed. If so, I invite readers to add them in the comments.

16 thoughts on “Pipeline to Disaster”