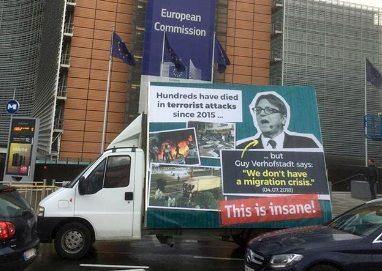 Guy Verhofstadt is a former prime minister of Belgium, and currently a member of the European Parliament. He serves as the leader of the Alliance of Liberals and Democrats for Europe, a parliamentary group that advocates for Turkish membership in the EU and more concentration of power in Brussels. He also represented the EP in the Brexit negotiations.

Mr. Verhofstadt is notorious for his harsh criticism of Hungary, which he has identified as a threat to the international order. Last month he hired an advertising billboard van to drive around Brussels, and eventually to Hungary, bearing the message “Stop Orbán”.

The Hungarian government has countered with its own billboard van. Our Hungarian correspondent László sends the following summary of the latest news:

The Rebel posted the full story; I found it at Origo.

Origo’s title reads: “Billboard that shows the truth to Verhofstadt hits the streets of Brussels”

Translated from the Facebook page of the Government of Hungary:

The (Hungarian) government’s van is on the streets of Brussels to draw attention to the consequences of Brussels’ policy that supports immigration. While Guy Verhofstadt believes immigration is needed, hundreds of people have been killed in terrorist attacks.

Though seemingly childish, I think these campaigns are effective because they do hurt the narcissistic genocidal villains of Soros’s army and their fragile propaganda, and spread well on social media. On the other hand, it was Verhofstadt who started taking it to such personal levels. This is of course a leftist tactic. Now they get a taste of their own medicine.

The non-PC language unveiling the naked truth displayed on the billboard truck is standard in the Hungarian right-wing mainstream media, which openly speak about Islamization and jihad, regularly interviewing leading figures of the Counterjihad such as Bill Warner, Geert Wilders, etc. So I can imagine that in Brussels this kind of language is like a cold shower for the Marxist left.

Update: Billboard van stopped and banned by authorities in Brussels

Csaba Dömötör, a spokesman for the Hungarian government, announced in a Facebook video that the van was stopped by policemen and the driver was forced to remove the billboard.

9 thoughts on “An Anti-Verhofstadt Billboard Van Comes to Brussels”