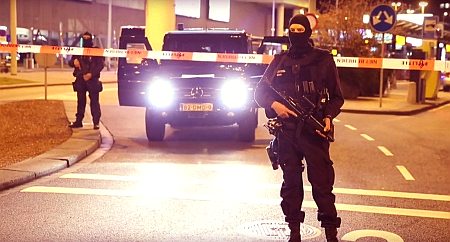 The Dutch are ringing in the new year at Schiphol Airport in Amsterdam with a bomb threat and cries of “Allahu Akhbar!”

Notice that suspected alleged perp is a “Canadian”.

Many thanks to FouseSquawk for translating this article from De Telegraaf:

Monday evening a man made bomb threat in Departure Hall 3 at Schiphol [Airport].The Marechaussee [military police] temporarily evacuated the hall and its immediate environs as a precaution, according to the Marechaussee. The suspect was taken away, witnesses report.

The entire situation lasted about a half an hour. According to the Marechaussee, the situation is under control [and] the suspect overpowered. According to a Marechaussee spokesperson, no force was used in the arrest as far as is known. The departure hall has been re-opened. The arrested suspect is a 51-year-old Canadian. No explosives were found. He is being held for further investigation.

According to bystanders the man is alleged to have shouted “Allahu Akhbar!” and screamed that he had a bomb.