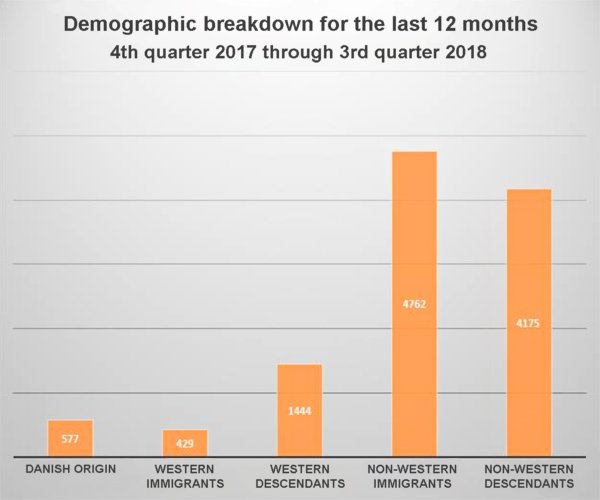 In recent years the Danish government has implemented a series of politically incorrect changes to its immigration policies, tightening restrictions, reducing benefits, deporting migrant offenders, and other measures to prevent immigration or induce new arrivals to repatriate themselves.

However, the demographic statistics for the past year seem to indicate that the government’s actions are too little, too late: during a twelve-month period non-Western immigrants and their descendants accounted for 94% of the country’s population increase.

Many thanks to Tania Groth for translating this brief article from NewsPeek:

The number of people of non-Western background in Denmark is growing much faster than the number of Danes.

The balance between Danes and people of non-Western background has reached a tipping point in recent years. Since it is an exponential development, this process will continue to accelerate.

In the past year the population of Danes increased by only 577. By comparison, the number of immigrants and descendants with a non-Western background grew by 8,937 people. Thus the number of people with a non-Western background has been growing more than 15 times faster than that of the Danes. This can be seen from a graph from Statistics Denmark, according to the award-winning blog Uriasposten.

During the third quarter of 2018 there were 499,903 immigrants of non-Western background and their descendants in Denmark.

Out of curiosity I crunched some hypothetical numbers to try to get an idea of how long it would be before the culture-enrichers outnumber the Danes in Denmark. I had to make a series of assumptions in order to produce the demographic projection below (the word “immigrants” is used here to mean non-Western immigrants):

Those are some pretty big assumptions. In fact, there’s no way that those annual rates of increase will remain the same for ninety years. The current situation will become unsustainable when the number of culture-enrichers reaches a certain proportion of the population, but it’s hard to say exactly what that proportion is — 15%? 25%? 50%? I don’t think anyone knows.

However, just to demonstrate the power of exponential growth, this table shows that if the current rates continue, the population of culture-enrichers will exceed the population of Danes for the first time in the year 2103:

So what will change between now and 2103? Will Denmark find additional ways to encourage (or compel) its Muslim population to emigrate? Will ethnic Danes start making more babies? Or will they surrender to the inevitable, stop making babies entirely, and let the Muslims establish a Danish Emirate?

And just think — this is the projection for Denmark, which has one of the most anti-immigration governments in Western Europe. Can you imagine what the projection would look like for Germany or Sweden?

If This Goes On…

14 thoughts on “Denmark Abolishes Itself”