Our Dutch correspondent H. Numan sends this report on the latest political skullduggery in The Netherlands. 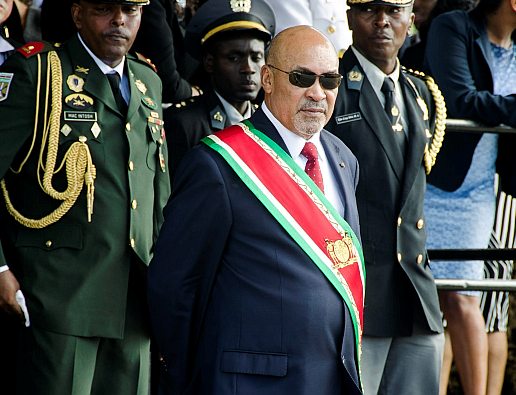 (Desi Bouterse: “We’re 100% multicultural and arrest you if you think different!”)

You may have heard about it. Or not; this scandal is not really international front page news. The new Dutch Minister for Foreign Affairs had to apologize profusely for stating the earth was round. It actually isn’t. The earth really is flat. Sorry to put you on the wrong foot. Rest assured, he will have to do better than that; the idea is to have him removed for his harsh words. What actually happened?

After the ignominious demise of minister Halbe Zijlstra, a new minister for Foreign Affairs was appointed. His name is Stef Blok, from the conservative VVD party. A career politician, and somewhat of a gray mouse. He is a conservative member of his party. Not an outspoken person. You rarely hear anything about him. Until he made his infamous speech last week.

In that speech he said the multicultural society is a failure. There isn’t a single example of a successful multicultural state, and gave Suriname as an example, among others. According to him Suriname is a failed state, very much linked to its ethnic composition. He said even the USA and Australia weren’t really multicultural states, as the indigenous population was largely exterminated. And: if you live in a prosperous area you won’t see any problem with multiculturalism. If you happen to live in the middle of it, you most certainly do. I can’t see the difference between a Hutu and a Tutsi, or a Sunni and a Shiite. But unfortunately, they themselves can.

What he actually said is what we here on the Gates know and talk about. Plain common sense. He didn’t say anything untoward. He didn’t judge, he just stated obvious facts. In other words: an inconvenient truth. For which he could have collected a Nobel prize if his remarks were factually incorrect, but political correct. It’s the other way around, so Blok’s head very likely goes on the block. Progressiveness is anything but tolerant, as we all know too well.

What you don’t know is that he was set up. It was a trap. The deep sh*t state does not exist only in the USA; it also rules in Holland, among other places. Especially at the ministry for Foreign Affairs. If you happen to be a white straight male, don’t apply for a job there. You won’t get it. The very top of the ministry is firmly in the hands of diversity and political correctness. So much so that this top doesn’t want to take orders from anyone else.

The last minister Sigrid Kaag was their ideal minister. She was part of the previous Rutte cabinet, a member of D66 party and as multicultural as mohammed was muslim. The top of the ministry adored her. They want her back, and fast! So what do you do when you get two undesirables in a row? You get rid of them. The first one was easy enough. Halbe Zijlstra boasted stupidly — quite normal for a politician — but his boasts were blatant lies, so he had to go. I reported about his demise here.

The ministry was looking forward to Kaag II, but got stuck with Stef Blok. Oh, the horror. He’s a neo-nazi (= not one of us)! We have to do something about that, and real quick. So they did. They set a trap for the minister, and he fell for it.

Now I have to do a bit of nitpicking. First of all, the top of the ministry should know better than anyone else that ministers and staatssecretarissen (junior ministers) are political appointees. The parties negotiate which party gets to head which ministry. The idea that you can embarrass an undesirable minister into oblivion and replace him with your choice from a different party is ludicrous. At best you can get rid of someone and hope he will be replaced by a better one or at least a lesser evil, from that same party. The very idea that the ministry heads appoints their preferred minister over the parties is too silly for words. But still… they try. It does tell you how much the deep state cares about the trias politica, separation of powers and democracy.

Another nitpick: this scandal is described in the Dutch media as ‘the mutiny on BuZa (=short for Foreign Affairs)’, but that is incorrect. It should be ‘the barratry on BuZa’. A mutiny more often than not comes from the ranks. Barratry is exactly the same, but committed by the officers themselves. This is a revolt from the top, so no mutiny here. I doubt if the lower ranks even knew what was going on. All they were told was to prepare the rooms, and serve the coffee.

Okay, I’ll leave the nits alone for now. So how did they entrap the minister? Easy. He was invited to clarify his ideas and position for the top, in a video conference. The room was unfortunately not big enough to contain all invited witnesses — oopsie — ‘guests’. Did I say witnesses? Silly me! We can use the rooms next door with video screens, so everybody can see what you want to say.

By ‘everybody’ Mr. Blok thought about those present at the private conference. The organizers meant by ‘the entire world’. I’m surprised that a political heavyweight as Stef Blok (he has held several top cabinet positions before) fell for it. The ministry top let Blok say whatever he wanted to say, and probably goaded some juicy quotes out of him, just to be sure.

It was a piece of cake to make sure this private video conference leaked out to the press. Someone gave the video to the VARA public broadcasting organization, who aired it in Dutch and English. Kees Verhoeven (D66) spread it on Twitter, the NRC Handelsblad asks for his resignation and so on. The left-wing circus in full swing. You know the drill by now.

The people who adore ‘an inconvenient truth’ have a tendency for inconvenient timing. Setting up a climate conference in Denmark in the middle of winter is not a good idea when you want to warn about global warming. Especially if a snowstorm blocks that conference. This act of barratry was equally inconveniently timed: in the middle of the summer holidays. All politicians are recuperating from their hard work right now. Nobody is home. Lillian Ploumen (PvdA) tried to get a motion passed to recall parliament, to no avail. Suriname, where convicted drugs criminal Desi Bouterse rules with his cronies, raised bloody hell to embarrass the minister, also without success. As if to prove Blok’s point, they appeared as an all black band in military uniforms.

Stef Blok showed his spine by immediately apologizing. He has the same spine as Mark Rutte — none whatsoever. Even a jellyfish has a bigger backbone. Sure, he kept his job. For the moment. For how long, that is a very different matter. The Left are jealous gods. Thou shalt not worship anything else. If you do, they’ll get you. Sooner or later. There was absolutely no need for his strong conservative words, as there are no elections in sight. That would be the only excuse the left might accept. I have no idea when he will retire from politics, but he will. Probably somewhere after September. Right now our hardworking selfless politicians are enjoying a well-earned break from June until September. That’s enough time to distance the top of the ministry from this attempted coup. Blok already wanted to resign before accepting this post. He’ll be retired quietly, and just as quietly an acceptable replacement (Kaag?) will take over. A win-win for everybody (that matters).

To finish this article: how many people were actually involved? Not a lot. Probably fewer than twenty. If that many. A few to entice the minister to state his opinions, one to arrange for a small enough room for the meeting with video screens outside, a few to leak the stuff to the press and blow the whistle. The others, the audience, where there to enjoy the lynching. You don’t need a lot of hangmen at a lynching, but you do need a crowd. Otherwise it’s murder, not a lynching.

How many people actually govern the whole country? Again, not a lot. If you add everybody together, perhaps 150,000 out of a population of 17 million. That’s really everybody. From the king/prime minister down to a lowly head of a small civil administration unit, plus the business elite, plus the press. In America you have more democracy, so the numbers are a bit higher there, but roughly the same. That is less than one percent who decide and make policy.

In Holland, as anywhere else in the Western world, that less than one percent has decided that white males are the cause of everything bad, windmills will solve all our energy problems, African mass migration will solve our labor problems, and islam has to become our new religion. The other 99% simply have to accept that.

The problem is that the other 99% won’t. Of course the only party that supported Blok in this was the PVV. Not even his own VVD, although they did shield him. No surprise there, what? In America the 99% have a defender in Trump, and he’s very successful. In Holland — or in Europe — we’re not that lucky. Geert Wilders is effectively muzzled, Marine Le Pen has to face the dock. Both parties have very little funds to do anything worthwhile with. The 1% still have many tricks up their sleeves.

Politically killing Blok was just one of them.

20 thoughts on “Barratry on Foreign Affairs”