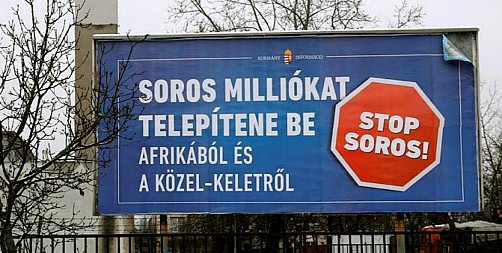 After gaining a two-thirds majority in the Hungarian parliament, the Christian Democratic alliance led by Prime Minister Viktor Orbán has passed a comprehensive law designed to prevent illegal immigration, in addition to the controversial “Stop Soros” Act.

Many thanks to CrossWare for translating this article from the Hungarian daily Magyar Idők (Hungarian Times):

Parliament adopted the seventh amendment to the Basic Law at the initiative of the government on Wednesday. The fundamental obligation of the state to protect the country’s constitutional identity and Christian culture, and to prevent the settlement of a foreign population in Hungary was enshrined in the constitution. According to the adopted Stop Soros Act, the promotion and support of illegal immigration will be criminal offenses under the law.

The law requiring the support of two-thirds of all parliamentary representatives was approved by 159 votes for YES to 5 votes for NO.

With the amendment submitted by László Trócsányi, Minister of Justice, the constitutional identity and the Christian culture of the country became a duty of all organs of the state. The wording of the responsibilities shared with the EU was extended and incorporated in the constitution. The innovation is that the exercise of common competence must be in line with the fundamental rights and freedoms contained in the Basic Law, and must not restrict the inalienable right to dispose of the territorial units, population, state forms and state structures of Hungary.

No foreign population may be settled in Hungary, they recorded.

The text of the Basic Law now includes the stipulation that that a foreign citizen without the right to move and reside can [only] live on Hungarian territory on the basis of an individual request from the Hungarian authorities. As specified in the text, it has been determined who is entitled to asylum in Hungary: non-Hungarian nationals who are persecuted because they belong to a particular social group, for reasons of religious or political beliefs in their country of origin or country of their habitual residence, or because their fears of direct persecution are well-founded.

Until now the Basic Law did not contain the restriction that a non-Hungarian citizen who came to Hungary through a country where there was no direct danger of persecution is not entitled to asylum. The basic rules for the granting of asylum are determined by a pragmatic law.

There is now a legal protection for the home. According to the Constitution, freedom of expression and the right of assembly cannot justify harming the private and family life of others, or their homes. [Translator’s note: This will take care of liberals and Antifa, who tries to harass opponents in their homes; it also takes care of the notorious homelessness, because there are plenty of job opportunities and housing available.] The current text of the Basic Law allows a law or local government to classify a habitual public place of residence as illegal in order to protect public order, public security, public health and cultural values in a specific part of the public domain.

With this amendment, from October 15 onward, it was forbidden to live in a public area.

This article also sets out the legal protection of the home, with Hungary ensuring the conditions of decent housing and the access to public services for all.

The police have been assigned the statutory duty to take part in preventing illegal immigration.

The amendment, with certain exceptions, will enter into force on the day following its publication.

Interior Minister Sándor Pintér’s request for two-thirds support was met by 160 votes in favor, 18 against in Parliament. The two-thirds majority included Fidesz, KDNP, Jobbik, Independent Dóra Dúró and Imre Ritter, who voted in favor, while MSZP, Dialogue, Independent Anett Bősz and Ákos Hadházy, who left the LMP, voted against it. Some other members abstained from the vote.

According to the new law:

It is against the law and punishable with a prison sentence to facilitate and support illegal immigration with organizing activities in order to allow the initiation of an asylum procedure in Hungary for a person who is not subject to persecution in his or her country of origin or in the country he or she transited to arrive in Hungary.

Organizing activities may also aim to obtain a residence permit for unauthorized entry. If a more serious offense is not committed, it is a misdemeanor, and these acts are punishable by closing down [the organization].

However, those who provide financial means for the commission of these offenses or carry out organizing activities on a regular basis shall be punished by imprisonment for up to one year.

The same sanctions shall be applied against those who commit the crime for financial gain, for more than one person, or within the eight-kilometer border zone.

The punishment may be relieved without restriction if the perpetrator reveals the circumstances of the offense until the indictment has been handed down.

The Penal Code particularly identifies as an “organizing activity” the actions of someone organizes border monitoring, publishes, distributes or commissions information, or builds or operates a network [of activists]. A ban [from the country] may also be applied against the offenders.

The asylum law has been amended with the provision that it is no longer possible to accept an application for asylum from someone who arrives in Hungary through a country where he or she is not exposed to persecution, serious harm, or if the country through which he or she traveled has been adequately protected, or determined that the applicant might have applied there for such a claim.

According to the rapporteur, this provision is in line with the Geneva Convention, which protects only those who came directly from an area where their lives and their freedom were at risk.

In addition, several passages of the Asylum Act were considered to be pivotal.

Those who are being prosecuted for the purpose of committing crimes related to border protection and state border rule should be absent from the eight-kilometer zone.

They do not, however, apply to the prohibition of those who for at least five years in the past had an address [home] in the eight-kilometer zone prior to the modification of the law.

Anyone who breaches the new rules of the State Border Act commits an offense, records the new modified law.

The legislation supplements the law on the police, on the one hand, with the provision that the police be involved in the prevention of illegal immigration.

On the other hand, the institution of border protection and removal has been included in the law for the removal by police from the Schengen border line, or within a distance of eight kilometers from the border line, those who are being prosecuted for the following offenses: illegal crossing of the border, obstructing and damaging border defense, smuggling people, facilitating illegal residence or facilitating illegal immigration.

The Act will enter into force on the first day of the month following its publication.

According to the justification of the proposal, the Hungarian people are right to expect the government to use all means to combat illegal immigration and associated activities.

This is the purpose of the Stop Soros Act, which “wants to prevent Hungary from becoming an immigrant country,” as was written in it.

Government: The Stop Soros Legal Package Expresses the Will of the Hungarian People

The Government Information Center said in a statement that enhanced protection is needed because “mass immigration affecting Europe is a continuous threat, while the Soros network and the immigration policy in Brussels threaten to flood our country with migrants”.