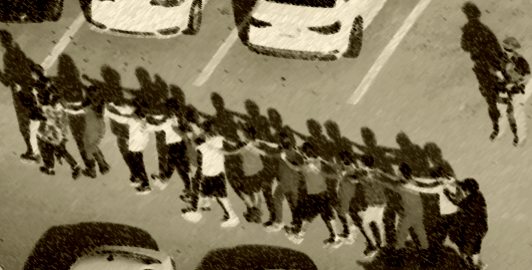 In the blurb for last Friday’s news feed, I composed a flip introduction to the reports about the murderous school shooting in Texas committed by a kid named Dimitrios Pagourtzis, which had happened earlier that day: “Today’s school shooting was held in Santa Fe, Texas.”

I’d used the same formula for introducing school shootings once or twice in the past. This time, however, a reader took exception to my ghoulish sarcasm, and emailed me with his reproach:

I’ve been a long time reader of your site, and I agree with the vast majority of your viewpoint. While I KNOW that no disrespect was intended, the comment hurts.

I wrote him back with this reply:

Yes, well, it’s a sardonic, sarcastic way of presenting it (which I’ve been using for a while), and it’s meant to hurt. It’s intended to remind the reader what a media circus school shootings have become. The lavish media attention and feting of the victims’ families helps GUARANTEE that there will be more — and worse — shootings in the future.

THAT’S what my sarcasm is about.

The media frenzy that accompanies school shootings these days is driven by a couple of cultural imperatives.

The first is the hoary old newspaper adage: “If it bleeds, it leads.” That was true when Caveman Og chiseled the first edition of the Neanderthal Times. It was true when everyone read at least two newspapers every day, one in the morning and one in the evening. And it’s true now, when we all have access to fourteen gazillion cable channels. The story with the most slaughter and gore is the one that grabs the most viewers.

The second reason that school shootings cause such moist eyes in the media is their major subtext: gun control. Democrat politicians wait a decorous period of time — in Joe Biden’s case, at least two or three hours — and then their litany begins: Haven’t there been enough school shootings? It’s time to get serious about gun control!

This imperative has become even more urgent since the election of Donald Trump. A large chunk of the president’s support comes from Second Amendment enthusiasts. Even the most skeptical libertarian gun owner regards the president more favorably than he does any other major political leader. These are the people that put Mr. Trump over the top in his contest with Hillary. They are the primary wellspring of intractable American orneriness. And it is essential to the Deep State that they be quelled and subdued.

Which means they must be disarmed.

Owning firearms helps give ordinary citizens a sense of autonomy, independence, and self-sufficiency. It’s not so much that they expect to shoot it out with jack-booted law enforcement personnel who break down their front door. It’s just the feeling: “I can handle what comes up. I can take care of myself and my family. I don’t have to just dial 911 and hope we survive till the cops get here.”

This feisty independence is what the State must curb to obtain the compliant drones it desires. The larger and more intrusive the government becomes, the more it needs to stamp out independent thinking and personal initiative. It requires docile, obedient citizens who are accustomed to being told what to do by the authorities.

That’s why the guns have to go.

A news editor at CNN or The New York Times doesn’t need to be told these things. Even if he didn’t have sources in the permanent government whispering into his ear, he’d still be shilling for gun control.

That’s what my sardonic sarcasm is about when I mention a school shooting in the news feed. I’m not denying the horror and suffering experienced by the survivors — in fact, the exploitation of the families of the victims is the greatest travesty of the odious public spectacle.

School shootings are ginned up into a media extravaganza in order to generate and sustain the momentum that pushes the country closer and closer to (attempted) firearms confiscation. That’s what the 24/7 propaganda is in aid of.

And that’s what my brief, obnoxious introductions to school shootings are meant to draw attention to.

18 thoughts on “Forget the Oscars. Forget the Super Bowl. School Shootings are the Trending Public Spectacle.”