Coalition negotiations have failed in Germany, and there will probably be another general election. Egri Nök just filed this report at Vlad Tepes in a slightly different form.

This pushes Merkel into the deepest crisis of her twelve-year career.

“It is better not to govern, than to govern wrongly,” said FDP chief Christian Lindner to the press around midnight local time.

Angela Merkel said in the early Monday-morning hours that she deeply regretted the FDP’s decision. She still believes that it would have been possible to find a compromise with the Greens on the controversial topic of refugees.

But FDP chief Christian Lindner said that while it would have been possible to find common grounds with the CDU (Merkel) and CSU, the differences between FDP and Greens were simply irreconcilable.

Until Sunday night the central contentious point was the topic of migration [i.e. refugees]. CSU and FDP demand a curb of migration, while the Greens oppose that and demand (on top of that) “family reunification” for hundreds of thousands of Syrians in Germany.

The pack is reshuffled.

We at Vlad have been predicting this from the moment the results came in on September 24. 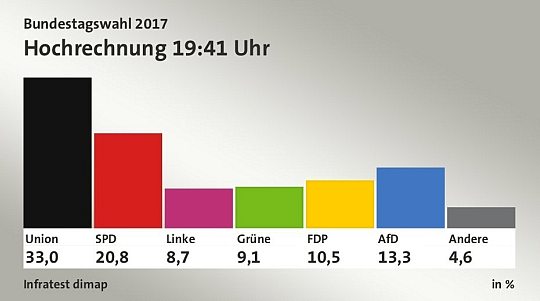 Merkel said in the early morning hours that she intended “to lead the country through the difficult weeks” that lie ahead.

25 thoughts on “Mutti: “Does this mean I’ll have to hold another one of those tiresome elections? Curses!””