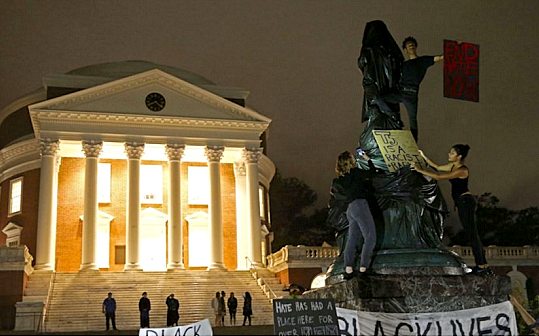 I posted an essay last week about the solemn occasion when the statue of General Robert E. Lee in Charlottesville was shrouded in its new official Confederate burka — a temporary expedient until the trivial inconvenience of state law can be circumvented, and the statue removed and destroyed.

It was only a matter of time until other Dead White Males were issued their burkas. But it hasn’t been very long — less than a month later, Thomas Jefferson has earned his. Standing in front of the Rotunda at the university he founded, Mr. Jefferson’s offensive slave-owning visage was covered up last night by the righteous activists of Black Lives Matter.

Confederates go first. Then other slave-owners. Then all the Founders who imposed their oppressive racist patriarchal system upon the marginalized minorities, women, LGBTQs, Native Americans, and disabled people of America. After that it will be the rest of the Dead White Males, all the way up to St. FDR — despite his being the author of the New Deal and a consummate progressive, Mr. Roosevelt was white and male and is now safely dead, so he must go.

We stand united in our determination to eliminate the history we don’t like and replace it with the one we like. Only then can we join hands and stride confidently into the bright, shining, tolerant, inclusive multicultural future.

Here’s the report from The Washington Times:

The statue of Thomas Jefferson was attacked Tuesday evening by protesters at the university he founded.

According to local media in Charlottesville, about 100 students, faculty and local residents shrouded the statue in black and hung a banner on it saying “Black Lives Matter” and that “White Supremacy” should commit a sexual act.

Others in the small rainy-night crowd carried signs reading “Thomas Jefferson is a racist and a rapist” and chanted “No Trump, No KKK, no racist UVa.”

The defacement came one month after riots over a white-nationalist protest against a similar shrouding by the city council of statues of Confederate generals Robert E. Lee and Thomas “Stonewall” Jackson.

“One month ago, we stood on the front lines in downtown Charlottesville as all manner of white supremacists, neo-Nazis, and neo-fascists swarmed the area,” a speaker told the crowd, according to the Charlottesville Daily Progress. “Two months ago, the Ku Klux Klan rallied in their safe space, fully robed and fully protected by multiple law enforcement agencies who brutalized and tear gassed peaceful counter-protesters.”

4 thoughts on “The Founders’ Burka”