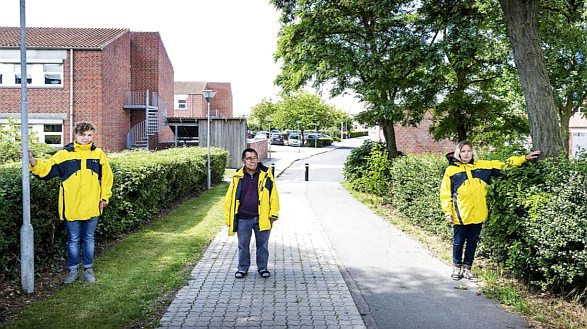 Here’s the latest prank by those mischievous “youths” in Denmark: long-distance beheading. The young scamps hoped to execute a traditional decapitation without having to lay a hand on a scimitar or get blood on their Nikes. Their apparent plan was truly demonic, and tragedy was only averted by sheer luck.

Many thanks to Tania Groth for translating this article from BT.dk:

Photo caption: It was here between a tree and a light pole on a path in central Korsør that the three volunteers found iron wire that someone had strung up across the path at a height of one and a half meters [4′ 10″]. Two of them, Rasmus Erichsen and Janni Rasmussen were along on the evening they came across the wire.

The volunteers “The Night Ravens” in Korsør are used to a bit of everything when they, weekend after weekend, patrol the town of Korsør and its night life in order to help prevent violence and crime.

But the sight of what they found on June the 24th at about 11:30pm, was of a character that truly shocked the three Night Ravens on duty that night.

“I’ve never seen anything like that. It could kill completely random people” says one of the volunteers, 37 year old Janni Rasmussen.

On a heavily trafficked bike path next to one of Korsør’s major roads close to the center of town, a long piece of wire was tautly strung between a lamp and a tree. The wire is of the thick kind that is also used for fencing.

Photo caption (not shown): It was iron wire like this that young people strung across a bike path in Korsør. It is, amongst other things, used for fencing.

The iron wire was strung up at a height of one and a half meters and served as a so-called trip-wire.

A trip wire has the devilish effect that it does not give if you walk, run or cycle into it at high speed.

“It’s completely crazy and could have cost human life. Imagine bicycling, and it hits your throat. Then you would cut off your head!” says Janni Rasmussen, who, along with colleagues Rasmus Erichsen and Benjamin Erichsen were on patrol that night, and by accident discovered the iron wire.

The case follows in the wake of several cases of gross harassment against completely random people that have been in the headlines in recent years. First, it was random drivers who experienced being hit by concrete blocks, stones, and metal screws thrown from highway bridges. For a German family this ended in tragedy when a mother of a little boy was killed while the father ended up brain-damaged when they were inadvertently hit by a 30 kilo [67 lb] stone thrown from a Funen motorway bridge. The stone went through their windshield. Since then, drivers from all over the country have experienced wheel bolts being loosened on their cars so that they risk the wheels’ falling off while driving.

Lately it was a group of partying students who were attacked with fire crackers, bottles and eggs as they were out celebrating their graduation.

And the iron wire was not the only meaningless destruction that the three Night Ravens encountered that night.

On a heavily-trafficked road, young men had thrown large concrete tiles on the road — most likely with the intent of harassing passing motorists or some of the student wagons (a Danish tradition of students partying and celebrating their graduation riding around town on trucks) that were especially numerous that Saturday evening.

And at the nearby Gasværk Street there was an ordinary cord strung between a lamp and a tree — the same principle as the wire. It was, however, strung somewhat more loosely than the iron wire.

The three volunteer Night Ravens managed to catch a glimpse of five or six youngsters leaving the place, but they were 200 yards away, so they could not see who they were.

“We could only see that there was a group of young people, but not who they were. However, we know that there are a number of maladjusted youths who make trouble. We are quite convinced that they are the ones behind these acts,” says Janni Rasmussen.

“It’s frightening. As I see it, it’s a form of terror that is going to hurt completely innocent people,” she adds.

Photo caption (not shown): On Gasværk Street a cord was also stretched between a light pole and a tree.

The three Night Ravens removed the iron wire, just as they removed the many tiles from the road.

Subsequently they contacted the police, who said they would send a patrol. Whether they did so, the Night Ravens don’t know. In any case, they didn’t see any police.

21 thoughts on “The Latest Trend in Denmark: Long-Distance Beheading?”