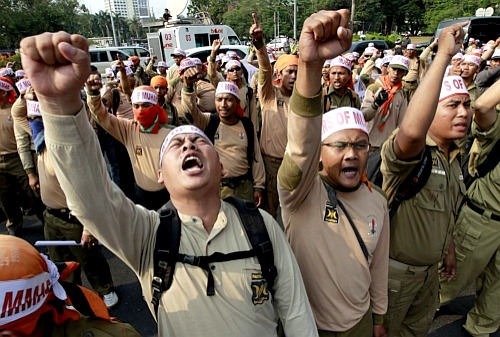 The following essay by a Polish scholar living in Hungary examines the migration crisis in Europe as it relates to the push for “global governance”.

Many thanks to CrossWare for translating this piece from the Hungarian daily Magyar Idők:

The writer is a Polish historian who lives in Hungary

Europe is in an uproar from migration commissioner Dimitris Avramopoulos’ announcement that the European Commission has begun infringement proceedings against Poland, the Czech Republic and Hungary, the three EU member states who refuse to take in migrants from outside of Europe. At the same time, it may be surprising that the Commission has made an exception for the fourth Visegrád country, Slovakia. In September 2015, Slovakia, like Hungary, the Czech Republic and Romania, also voted against the mandatory quota decision, which was adopted on the basis of the majority vote of the member states before many terrorist acts had been committed. (Poland, which at the time was still governed by the liberal Civilian Platform, voted for the proposal.)

In their lawsuit at the end of 2015, Slovakia and Hungary also attacked the mandatory migrant distribution for all EU member states at the European Court of Justice. In addition, at summits of Visegrád countries the Prime Minister of Slovakia, Robert Fico, repeatedly emphasized the unanimous position of the cooperating Visegrad states on this issue. Still, there is nothing to be surprised about, if we take into account the amazing inconsistencies of the EU’s power bodies on a variety of matters.

Not Just the Visegrad Countries Are Blocking Distribution

Virtually all the EU Member States passively resist to the initial transfer of migrants, whose number has already grown from 120,000, to 160,000 — which is formally only made up of people who are victims granted refugee status, but who are still from a large culturally and generally religiously alien group of people. Up until now, only a small number — 21,000 people — have been distributed.

According to the most recent report on June 9 of this year, Austria and Denmark have not officially taken in anybody from Asia on the Balkan route or on the route from Africa to Italy. Austria, which gradually moved away from the Germany’s “open gates” (Willkommenskultur) politics, promised to take only fifty people in this May. In this context, a Polish political journalist remarked ironically: “Juncker’s European Union is like an army in which the commands must be received with a loud and obedient “YES, SIR!” (Jawohl!), but they no longer need to actually execute them”.

Slovakia was left out of the countries that were reprimanded in the second half of last year, when it held the EU presidency; it received a huge “number” of migrants from Iraq, a total of 16 (!). The above-mentioned statement indicates that the Czech Republic also accommodated 12 refugees, mostly Iraqi Christian families. Would there be a substantial difference between 12 and 16? Otherwise, Germany — whose political leadership (Chancellor Angela Merkel) is most supportive of the EU’s efforts to provide human labour in such a destructive way with a mass invasion of foreign nationality, culture and religion — has so far formally accepted only 870 people. That’s just 0.54 percent of the 160,000 people, or a fraction of what Germany committed to in 2015. Therefore, under the standard used for the countries of the Visegrad Group, Germany and the other member states should also be subject to the same procedure, as emphasized by Jadwiga Wisniewska, a member of the reform-conservative Law and Justice party that currently governs Poland, in his speech in the European Parliament.

Merkel Has Failed to Comply With the Maastricht Requirements

MEP Hans-Olaf Henkel, one of the leading politicians of AfD, a Eurosceptic party in Germany, when interviewed recently by Anna Rybinska, made remarkably impressive statement in the Polish wPolityce.pl portal’s article. He argues that the proceedings against Poland, the Czech Republic and Hungary are, above all, the “roar of the European Commission’s hypocrisy. I do not recall,” the EU official said, “that the EU initiated proceedings against Germany for breach of EU law, when it first violated one of the Maastricht criteria after the introduction of the euro, that the budget deficit should not exceed three percent of GDP.” The Maastricht Treaty has been violated at least a hundred times in other respects. “And nothing happened,” Henkel went on, “and suddenly it turns out that the rejection of the reception of refugees by the Poles, Czechs and Hungarians is a terrible misdemeanor … It is too transparent and a totally inconsistent reaction.”

To the reporter’s question about why the European Commission decided to proceed in this case, the representative said, “It happened under pressure from the German government. Berlin is so isolated in Europe with the asylum policy it advances, that ultimately it must force it onto its partners, to support solutions they [the Germans] benefit from. Even the French Government also expressed openly that it does not support Angela Merkel’s asylum policy. Sweden closed its borders when Germany opened its doors … There is not a single member state in the European Union that would support Berlin’s open border policy … With the initiation of the European Commission’s infringement proceedings against Poles, Hungarians and Czechs, Merkel is merely diverting attention from Berlin’s asylum-related stance.”

This opinion is rife in a statistical survey carried out by the Pew Research Group of the Washington Research Foundation, published recently on June 15. The study presents the attitude of the population of many European Union countries about the where the responsibility for the refugee issue belongs: the EU authorities, or the country’s own government? According to the results of the investigation, 74% of the public took the stand of the EU countries and want to retain national competence.

Not only Hungary and Poland (where the results were 82% and 77%), but also in Western European countries. France, Germany and the Netherlands also had surprisingly many — approximately three quarters of those surveyed opposed central EU competence.

The Spaniards and the Italians were the least trustful of their own state (62 and 54 percent), but in the latter two cases the majority still opposed putting the fate of their country in the hands of the overbureaucratized EU power and in the hands of international big capital interests.

The analysis of the EU attack on the three Visegrád countries, even if it is as tight as possible, is definitely worth undertaking in a broadened and historically deepened perspective, that is, to assess the system of events that are of global political significance for changing the current nature of Europe and the world.

The last century — the totalitarian system following on the heels of communism and fascism: globalism seeks to obtain domination over the globe by than other than the two earlier trends. It does not openly fight with fire and sword; it does not threaten with powerful, heavily armed armies; but it is spreading in a number of different, less obvious ways, which I wrote more about in my book published last year (Poland and Hungary are the bastions of Christian Europe in the past and present, publisher Méry Ratio, Budapest, 2016).

The power of globalism is based on the uncharted dominant position of self-serving wealth that the large international corporations accumulate in the military industry, which is artificially expanded via the system of the international financial community (the banks). The methods of conquest: by extending loans on the financial-economic plane, they force states to become politically and economically dependent; on the cultural plane, they spread spectacular but aesthetically shallow mass culture to convert communities to spiritually superficial societies. They seek to alienate people from the humanitarian commitments of religion, and they relativize the value system to destroy morality. As for Europe, which is based on Christian foundations, they try to flood it with people: millions of culturally and religiously alien migrants from other continents.

In the latter case, the goals of the globalist financial-economic elite are close to the intentions of the Islamic warrior (Medinan) version, which was created in the Arabian Peninsula in the 7th century BC. Since its beginning, its unchanged goal has been world domination. This Arab-Mohammedan invasion was stopped for the first time in 732 on the battlefield of Poitiers, which is currently in France, in Western Europe, and was achieved by the Frankish troops under the leadership of Charles Martel (the Hammer). The other great Islamic conquest against Europe was finally arrested in Vienna by the Christian armies under the command of the Polish king Jan Sobieski in 1683. The third major attempt to Islamize Europe is currently underway. This third Mohammedan invasion is proceeding under the wings of globalism.

Europe Does Not Learn From History!

Islamic forces, like globalism, are expanding without large armies because it is enough for them that the masses of refugees (mainly from Asia and Islamic countries in Africa) are leaving, where the international large-scale military industry supplies weaponry to both sides to keep the conflict alive as long as possible. These refugees are joined by overwhelming number of economic migrants. Their delivery to the heart of Europe is directed and financed by the local networks of the global elite.

There are plenty of potential terrorists in this very mixed mass of people. Immigrants who come to this continent are settled in a wider region of Europe, especially in the Balkans and the West, as if they were already in the Islamic sphere of influence;, and the unexpected terrorist attacks that could be linked to the Islamic State — to that illegally-established, bloody Islamic State, which was not destroyed by international armed forces because they did not want to defeat them — creating a sense of intimidation and misgivings among the populace of the continent. The destructive action which always existed among Islamists is used by the globalist international economic elite, who continue to exploit and madden them, as Tamás Fricz has discussed in the Hungarian Times: the bigger the chaos in Europe, the more destabilization occurs, the greater the chance that a weakened Europe finally will give itself over to the Shadow Power [Deep State] and accept their unlimited rule over the earth.

In an investigation of events on such a wide scale, the attack against the Visegrád countries may seem like an insignificant episode. At the same time, the Visegrád countries are the main force of resistance against global power, which, in turn, seeks to enforce Orwellian obedience to world rule, and it is so powerful and loud — irrespective of the fact — that no consistency can be discovered. In this context, it is essential for our besieged countries and our nations to further strengthen our unity and to support our civic movements. In addition, it is imperative to widen the unity to other countries, to awaken the Western population from its passivity, to activate national feelings in civilian movements there, and to create national-minded governments.

The fight will be long, and the globalist forces are ruthless.

24 thoughts on “The Third Mohammedan Invasion”