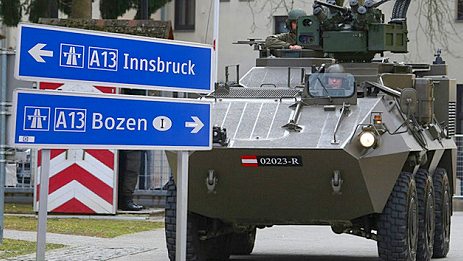 We’ve featured several articles in the news feed about the Italian threat to give visas to hundreds of thousands of “refugees” and send them to its northern borders. The following report from an Austrian perspective indicates that an Italian migrant-aid NGO — the Italian Refugee Council — is behind the threats, rather than the Italian government.

If you look at the chart of George Soros’ migrant-aid organizations that was recently featured in Zero Hedge, you’ll notice the same organization appears on the lower right side (Consiglio Italiano per i Rifugiati): 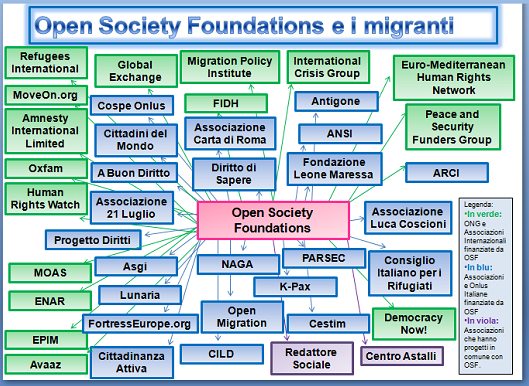 In other words, George Soros is threatening the European Union with an uncontrolled flood of migrants if it doesn’t get its act together and distribute the “refugees” promptly in an organized fashion, as required by the plan.

Many thanks to Egri Nök for translating this article from the Kronen Zeitung:

Refugee Council threatens: “Will take tens of thousands in trains to the Brenner”

[Photo caption (not shown): The Director of the Italian Refugee Council, Christopher Hein]

Until now, Austria was not put under pressure with such clarity: “We will open the harbors, and send the largest part of our refugees in trains and busses to the Brenner,” threatens the director of the Italian Refugee Council, Christopher Hein. He wants to ensure that “Europe reacts, at last.” It seems that Hein is willing to risk incalculable tensions at the border.

In this light, it appears justified that Austrian Defense Minister Hans Peter Doskozil (SPÖ) is preparing the army for a crisis situation at the border in the Brenner pass: nerves are raw in the leadership of the Refugee Council, which was founded with help of the UNO in Rome (Consiglio Italiano per i Refugiati, CIR).

“If we take the refugees to the border, Europe will react”

In the ARD “Tagesthemen” (news format), CIR director Christopher Hein literally threatened: “Let the ships arrive; let’s open our harbors for the refugees. But let’s provide buses and trains and take the large part of the people to the Brenner and to Ventimiglia on the French border, to Como on the Swiss border — then Europe will react.”

So the Italian Refugee Council intends to “deliver” tens of thousands of migrants directly to the Austrian border and risk another dramatic asylum crisis like autumn 2015.

[Photo caption (not shown): Police at the Brenner at a protest May 2016]

Italy feels abandoned to face the mass stampede across the Mediterranean, and not wrongly: 89,000 migrants crossed the sea in the first quarter of 2017 alone; the accommodations in Italy are overcrowded. Refugee Council director Hein: “In Germany, in Belgium, the Netherlands, hundreds of accommodations are empty. And in Italy, they all are overcrowded — that is paradoxical.”

The defense ministry in Vienna is observing the situation closely; preparations are under way for the army to secure the border in Tyrol with 750 officers. Unofficially, Rome’s threats are sharply criticized: “70 to 90 percent of these migrants from Nigeria, Ivory Coast, Senegal or Guinea do not even have a chance for asylum. The distribution rules decided by the EU do not apply to them either.”

Interior Minister Wolfgang Sobotka announced: “I am instructing the director for public safety to contact his Italian counterpart, to receive a clarification of this matter. I will also seek contact with Interior Minister Minniti to discuss the topic. Cooperation with the Italian authorities is working very well, and threats by an Italian aid organization won’t change this quickly.”

He relies on close observation of the situation: “We must obviously keep a close eye on the situation, and in case of an onrush, we must be able to boot up the border management at the Brenner within 12 to 24 hours. But it is also obvious that the closing of the Mediterranean route, in light of the development at Italy’s coasts, is not an option but a necessity. The demand by Foreign Minister Kurz to stop the ferry transfer of illegal migrants to the European mainland is essential in this regard, in my opinion.”

41 thoughts on “Showdown at the Brenner Pass?”