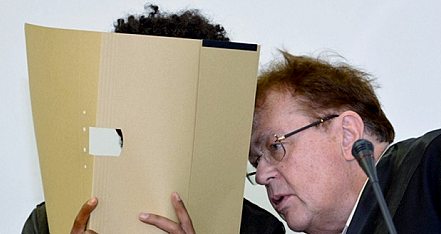 Enricher-on-enricher antics in East Hesse. What more can I say about this one? Words fail me.

Many thanks to Egri Nök for translating this article from Osthessen-news.de:

[Photo caption: a 20-year-old man, accused of mutilating someone’s face, converses with his attorney Ulrich Will at the district court of Hanau.]

May 15. 2017 — The trial against a 20-year-old man began this Monday at the district court Hanau (Main-Kinzig district). He allegedly cruelly assaulted an 18-year-old boy in the autumn of 2016, and is under suspicion of murder now: on the evening of the deed, around 9:30pm, he allegedly suddenly stabbed the victim in the neck in his apartment with two knives. It was probably over a debt of €50.

Afterwards the victim fell to the floor unconscious. The suspect then, when the had victim regained consciousness and was lying on the floor, bit off both his ears, cut off both eyelids with a knife, and then pierced both eyeballs with a ballpoint pen; then finally he strangled the victim, until the police arrived. The victim received medical assistance and was kept alive.

The defendant allegedly came to Germany in 2013 as unaccompanied minor refugee, and met the victim, also a minor refugee, in a youth welfare institution. The defendant is accused of attempted malevolent and cruel murder, and grave dangerous battery. At the start of the trial, the suspect remained silent.

The victim, after his stay in the Würzburg clinic and subsequent care in an institution for the visually impaired in Würzburg, has disappeared without a trace. He is being sought for. There are at least two more days scheduled for the trial.

25 thoughts on “The Face of Cultural Enrichment”